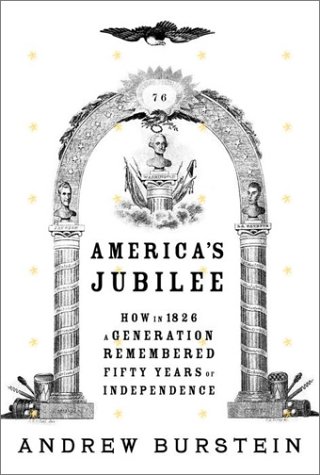 America's Jubilee : How in 1826 a generation remembered fifty years of independence

America's Jubilee : How in 1826 a generation remembered fifty years of independence

Editorial Review
On July 4, 1826, the United States celebrated its fiftieth birthday with parades and speeches across the country. But what ultimately sanctified the national jubilee in the minds of the celebrants was an extraordinary coincidence: the nearly simultaneous deaths of Thomas Jefferson and John Adams, the last pillars of the original republic, already venerated as legends in their own time. It was a watershed in the nation's history, a bright moment when the successors to the Revolutionary dream examined their own lives as they took inspiration from and found nostalgia in the accomplishments of the founders.

In this fascinating book, the distinguished historian Andrew Burstein explores what it was to be an American in 1826. Drawing on private diaries and letters, daily newspapers, and long-buried publications, he shows us the personal lives behind the pageantry and reveals an acutely self-conscious nation–anxiously optimistic about its future, eager to romanticize the Revolutionary past.

We follow the Marquis de Lafayette, the only surviving general of the War of Independence, on his triumphant 1825 tour of all twenty-four states. We visit an Ohio boomtown on the edge of the "new West," a region influenced by the Erie Canal and the commercialism that canal culture brought with it. We see through the eyes of ordinary citizens–the wife of a Massachusetts minister, the author of a popular novel of the day, the family of a prominent statesman–and learn about their gritty understanding of life and death, the nuances of contemporary sexual politics, and the sometimes treacherous drama of public debate. And we meet headline-makers such as the ornery President John Quincy Adams, the controversial Secretary of State Henry Clay, and the notoriously hot-tempered General Andrew Jackson, struggling to act in a statesmanlike way as he waits to be swept into the White House.

In this evocative portrait of the United States in its jubilee year, Burstein shows how 1826 marked an unforgettable time in the republic's history, when a generation embraced the legacy of its predecessors and sought to enlarge its role in America's story.
[+] Read More

Last updated: April 07, 2020 at 20:28 EST. Pricing information is provided by the listed merchants. GoSale.com is not responsible for the accuracy of pricing information, product information or the images provided. Product prices and availability is subject to change. Any price and availability information displayed on amazon.com or other merchants at the time of purchase will apply to the purchase of the product. As always, be sure to visit the merchant's site to review and verify product information, price, and shipping costs. GoSale.com is not responsible for the content and opinions contained in customer submitted reviews.

Find similar products to the America's Jubilee : How in 1826 a generation remembered fifty years of independence