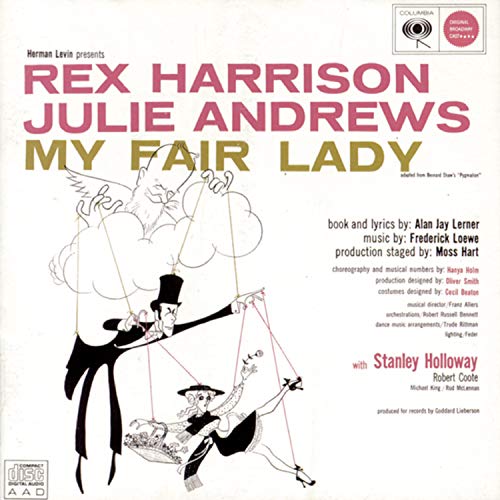 1956 Original Broadway Cast
Editorial Review
This recording was produced more than 40 years ago, only in mono, but from the day it was released it was a deserved phenomenon. It out-grossed the mega-hit show for months, and it still holds the record for the most weeks as a Billboard Top 40 album: 292. The reasons are many. Start with the 20-year-old Julie Andrews in peak voice, singing no fewer than eight sensational Lerner and Loewe songs, soaring most memorably to high C in "I Could Have Danced All Night." Rex Harrison perfected the art of talk-singing in a clutch of equally captivating numbers written especially for his voice, of which the most indelibly delivered is "I've Grown Accustomed to Her Face." And Stanley Holloway brought the best English music-hall style to an eager American audience with "A Little Bit of Luck" and "Get Me to the Church on Time." There were no scene-changers in Frederick Loewe's best score, and Alan Jay Lerner managed to fashion his libretto and lyrics so close to the language of George Bernard Shaw (on whose play Pygmalion the musical was based) that experts couldn't tell where Shaw left off and Lerner took over. Every song created character and advanced the plot. My Fair Lady was a show you "got"--and still get--on first listening--without having seen it. The London cast album (with the same leads) can give you stereo; the movie version, a fuller orchestra, Harrison and Holloway in full sail, and Marni Nixon dubbing Audrey Hepburn. But the Broadway cast album is still the one to have, and the one absolute must in any musical collector's CD library. --Robert Windeler

Set Price Alert
Set Price Alert
Read Reviews
Searching Stores
Found at 0 Stores
Last updated: February 20, 2020 at 07:28 EST. Pricing information is provided by the listed merchants. GoSale.com is not responsible for the accuracy of pricing information, product information or the images provided. Product prices and availability is subject to change. Any price and availability information displayed on amazon.com or other merchants at the time of purchase will apply to the purchase of the product. As always, be sure to visit the merchant's site to review and verify product information, price, and shipping costs. GoSale.com is not responsible for the content and opinions contained in customer submitted reviews.