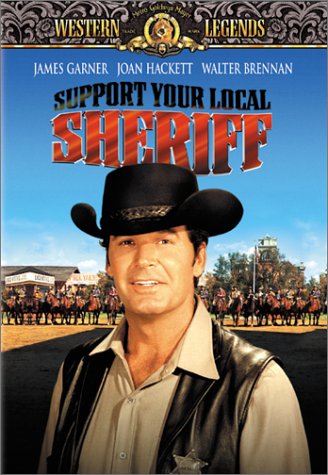 Editorial Review
While hardly the first Western spoof to ride out of Hollywood, Support Your Local Sheriff is easily one of the best. James Garner plays the confident, cool-headed cowboy who strolls into a wild gold rush town on the way to Australia and takes the job as sheriff. Like a parody of My Darling Clementine by way of Rio Bravo, he arrests the hotheaded but hopelessly confused son (Bruce Dern) of a ruthless ranching magnate (Walter Brennan). Stuck with a half-built jail (where he keeps his prisoner penned up with pure psychology and a few spatters of red paint), a rummy sidekick (google-eyed Jack Elam in one of his first comic turns), and a disaster-prone tomboy (Joan Hackett), he takes on a succession of gunfighters with increasing exasperation. "Sure is a childish way for a grown man to make a living," he laments before chasing one gunman out of Dodge by pelting him with rocks. Directed with laconic ease by veteran Western director Burt Kennedy, it's a clever spoof of familiar conventions in a lighthearted vein, more understated and affectionate than Mel Brooks's outrageous farce Blazing Saddles. It inspired a slew of imitators, including a decade of silly Disney Westerns that sank the genre in slapstick shenanigans, and was followed in 1971 by Kennedy's pseudosequel Support Your Local Gunfighter, which reteamed Garner and Elam in a more mercenary story of con artists and gunslingers. --Sean Axmaker

Last updated: June 05, 2020 at 13:27 EST. Pricing information is provided by the listed merchants. GoSale.com is not responsible for the accuracy of pricing information, product information or the images provided. Product prices and availability is subject to change. Any price and availability information displayed on amazon.com or other merchants at the time of purchase will apply to the purchase of the product. As always, be sure to visit the merchant's site to review and verify product information, price, and shipping costs. GoSale.com is not responsible for the content and opinions contained in customer submitted reviews.

Find similar products to the Support Your Local Sheriff