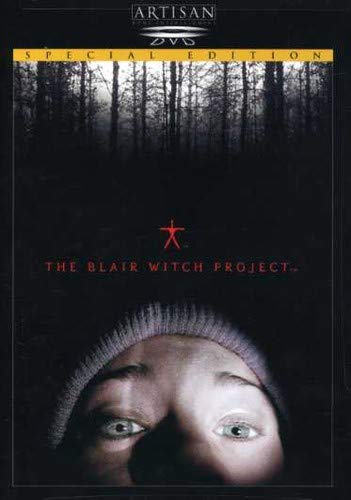 Editorial Review
The Blair Witch Project
Anyone who has even the slightest trouble with insomnia after seeing a horror movie should stay away from The Blair Witch Project--this film will creep under your skin and stay there for days. Credit for the effectiveness of this mock documentary goes to filmmakers Daniel Myrick and Eduardo Sanchez, who armed three actors (Heather Donahue, Michael Williams, and Josh Leonard) with video equipment, camping supplies, and rough plot outlines. They then let the trio loose into the Maryland woods to improvise and shoot the entire film themselves as the filmmakers attempted to scare the crap out of them. Gimmicky, yes, but it worked--to the wildly successful tune of $130 million at the box office upon its initial release (the budget was a mere $40,000).

For those of you who were under a rock when it first hit the theaters, The Blair Witch Project tracks the doomed quest of three film students shooting a documentary on the Burkittsville, Maryland, legend of the Blair Witch. After filming some local yokels (and providing only scant background on the witch herself), the three, led by Heather (something of a witch herself), head into the woods for some on-location shooting. They're never seen again. What we see is a reconstruction of their "found" footage, edited to make a barely coherent narrative. After losing their way in the forest, whining soon gives way to real terror as the three find themselves stalked by unknown forces that leave piles of rocks outside their campsite and stick-figure art projects in the woods. (As Michael succinctly puts it, "No redneck is this clever!") The masterstroke of the film is that you never actually see what's menacing them; everything is implied, and there's no terror worse than that of the unknown. If you can wade through the tedious arguing--and the shaky, motion-sickness-inducing camerawork--you'll be rewarded with an oppressively sinister atmosphere and one of the most frightening denouements in horror-film history. Even after you take away the monstrous hype, The Blair Witch Project remains a genuine, effective original. --Mark Englehart

Last updated: August 05, 2020 at 17:37 EST. Pricing information is provided by the listed merchants. GoSale.com is not responsible for the accuracy of pricing information, product information or the images provided. Product prices and availability is subject to change. Any price and availability information displayed on amazon.com or other merchants at the time of purchase will apply to the purchase of the product. As always, be sure to visit the merchant's site to review and verify product information, price, and shipping costs. GoSale.com is not responsible for the content and opinions contained in customer submitted reviews.

Find similar products to the The Blair Witch Project