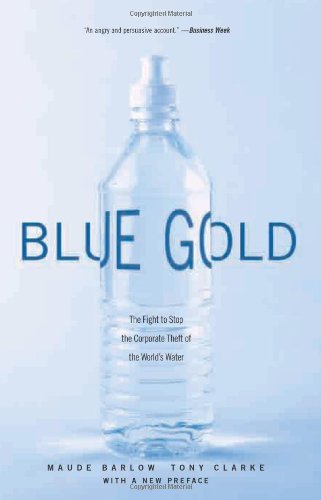 Blue Gold: The Fight to Stop the Corporate Theft of the World's Water

Blue Gold: The Fight to Stop the Corporate Theft of the World's Water

Book Description
A real-life thriller about the corporate takeover of our most basic resource.

In a shocking exposé, Blue Gold shows why, as the vice president of the World Bank has pronounced, "The wars of the next century will be about water."

Increasingly, transnational corporations are plotting to control the world's dwindling water supply. In England and France, where water has already been privatized, rates have soared and water shortages have been severe. The major bottled-water companies—Perrier, Evian, Naya, and now Coca-Cola and PepsiCo—head one of the fastest growing and least regulated industries, buying up fresh water rights and drying up crucial reserves. Maude Barlow and Tony Clarke, two of the most active opponents to this trend, show how the corporate giants act in their own interest and how, contrary to received wisdom, water flows uphill to the wealthy who can afford it.

The consumption of water doubles every twenty years—more than twice the rate of the increase in human population. Blue Goldcaptures in striking detail the forces behind the depletion of the world's fresh water, and the human and ecological impacts it entails.

Last updated: January 21, 2021 at 03:51 EST. Pricing information is provided by the listed merchants. GoSale.com is not responsible for the accuracy of pricing information, product information or the images provided. Product prices and availability is subject to change. Any price and availability information displayed on merchants at the time of purchase will apply to the purchase of the product. As always, be sure to visit the merchant's site to review and verify product information, price, and shipping costs. GoSale.com is not responsible for the content and opinions contained in customer submitted reviews.

Find similar products to the Blue Gold: The Fight to Stop the Corporate Theft of the World's Water