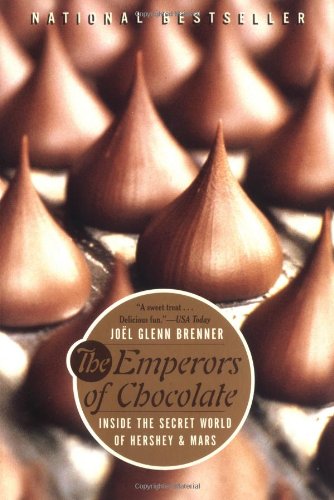 The Emperors of Chocolate: Inside the Secret World of Hershey and Mars

The Emperors of Chocolate: Inside the Secret World of Hershey and Mars

Editorial Review
Forrest Mars and Milton Hershey built business empires out of chocolate. In this long-awaited history of the candy business, over eight years in the making, former Washington Post reporter Joël Glenn Brenner tells a unique story that is like chocolate itself, a rich blend of many compelling ingredients--in this case, biography and cultural history, investigative reporting and literary journalism. Along the way, Brenner takes us inside a world as mysterious as Willy Wonka's Chocolate Factory, where industrial spies jockey for inside information as paranoid executives fight an all-out war for America's sweet tooth.

Forrest Mars, often called "the Howard Hughes of candy," was one of the most successful (and private) entrepreneurs in America, a brilliant autocrat who built a unique $20-billion-a-year empire. Milton Hershey was a dreamer who wanted to create not just a company but an industrial paradise, and after making an immense fortune, he promptly gave it all away. To this day, the Hershey company is controlled by a charitable trust and its profits fund the wealthiest orphanage in the world.

What began as a fraternity of small family-owned businesses has grown into a cutthroat industry increasingly dominated by corporate leviathans fighting for shelf space and swallowing their smaller competitors. Joël Glenn Brenner's investigation of this cloistered world is authoritative, eye-opening, and written with deep understanding of and feeling for her subject.
[+] Read More

Last updated: January 21, 2021 at 04:10 EST. Pricing information is provided by the listed merchants. GoSale.com is not responsible for the accuracy of pricing information, product information or the images provided. Product prices and availability is subject to change. Any price and availability information displayed on merchants at the time of purchase will apply to the purchase of the product. As always, be sure to visit the merchant's site to review and verify product information, price, and shipping costs. GoSale.com is not responsible for the content and opinions contained in customer submitted reviews.

Find similar products to the The Emperors of Chocolate: Inside the Secret World of Hershey and Mars