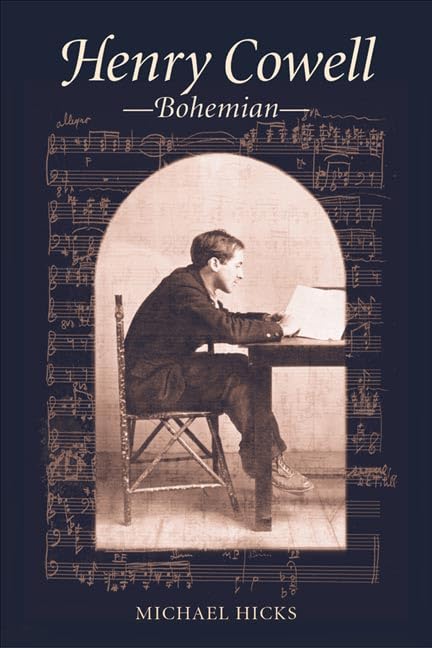 In this first full-length study of Henry Cowell, Michael Hicks shows how the maverick composer, writer, teacher, and performer built his career on the intellectual and aesthetic foundations of his parents, community, and teachers -- and exemplified the essence of bohemian California.

Author of the highly influential New Musical Resources and a teacher of John Cage, Lou Harrison, and Burt Bacharach, Cowell is regarded as an innovator, a rebel, and a genius. One of the first American composers to be celebrated for the novelty of his techniques, Cowell popularized a series of experimental piano-playing techniques that included pounding his fists and forearms on the keys and plucking the piano strings directly to achieve the exotic, dissonant sounds he desired.

Henry Cowell, Bohemian traces the venerated experimentalist's radical ideas back to his teachers, including Charles Seeger, Samuel Seward, and E. G. Stricklen, the tightknit artistic communities in the San Francisco Bay area where he grew up and first started composing, and the immeasurable influence of his parents. Mining the published and unpublished writings of his mother, a politically motivated novelist from the Midwest who carefully monitored the pulse of her son's creativity from birth, Hicks provides insight into the composer's heritage, artistic inclinations, and childhood.

Focusing. on Cowell's formative and most prolific years, from his birth in 1897 through his incarceration on a morals conviction in the 1930s, Hicks examines the philosophical fervor that fueled his whirlwind compositions, and the ways his irrepressible bohemian spirit helped foster an appreciation in the United States and Europe for a new brand ofAmerican music.

Last updated: October 22, 2020 at 08:02 EST. Pricing information is provided by the listed merchants. GoSale.com is not responsible for the accuracy of pricing information, product information or the images provided. Product prices and availability is subject to change. Any price and availability information displayed on amazon.com or other merchants at the time of purchase will apply to the purchase of the product. As always, be sure to visit the merchant's site to review and verify product information, price, and shipping costs. GoSale.com is not responsible for the content and opinions contained in customer submitted reviews.