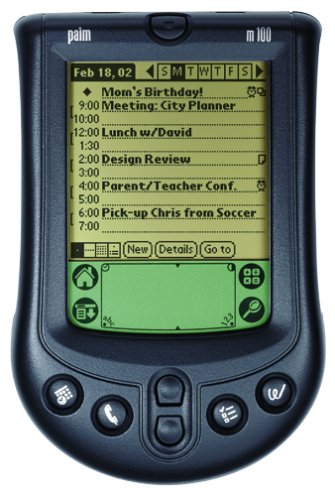 Features:Editorial Review
If you're new to the world of handheld organizers, the Palm m100 may just be the right fit for you. Under the hood, the Palm m100 features much of the same great software and options we've come to expect from Palm, such as scheduling and contact applications and an infrared port to beam information to other Palm users. But Palm has added some new features to both the engine (which runs Palm OS 3.5) and the chassis.

The first thing you notice is the new sleek, curvy design, which helps make it fit more snugly and comfortably in your hand. At just 4.4 ounces, the m100 is far lighter than the Palm III series but features essentially the same dimensions (4.66 by 3.12 by 0.72 inches). You can personalize your m100 by snapping off the faceplate and replacing it with different-colored accessory faceplates. The Palm m100 also includes a removable, double-hinged flip cover, which, with the flick of the wrist, opens like an original Star Trek communicator (though an over-exuberant flick will send it flying off its hinges). You can also display the date and time through a little window when the cover is closed, by pressing the scroll button.

The screen is sharp and has contrast-variable backlighting, though at 2 by 2 inches, it's slightly smaller than other Palm devices. Pressing the buttons at the bottom of the m100 automatically open the Calendar, Address Book, and To Do List applications. The fourth button maps to the new Note Pad application, which allows you to write notes directly on the screen in your own handwriting (though the original Memo Pad application remains on the system).

The 2 MB of RAM may seem puny in comparison to other Palm models (such as the 8 MB Palm IIIxe), and it is not expandable. However, you can still store an amount of data that would normally clog a paper organizer (up to 6,000 addresses and 1,500 to-dos and memos, according to Palm).

A great plus for users on the go is the new HotSync serial cable (instead of a bulky cradle), which is used to communicate with your PC and synchronize your Palm m100 data with data stored in the included Palm Desktop...

Last updated: August 07, 2020 at 22:11 EST. Pricing information is provided by the listed merchants. GoSale.com is not responsible for the accuracy of pricing information, product information or the images provided. Product prices and availability is subject to change. Any price and availability information displayed on amazon.com or other merchants at the time of purchase will apply to the purchase of the product. As always, be sure to visit the merchant's site to review and verify product information, price, and shipping costs. GoSale.com is not responsible for the content and opinions contained in customer submitted reviews.