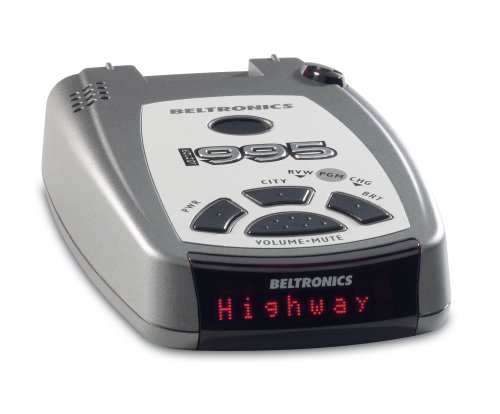 Editorial Review
POP radar, Ka band, Laser. The list of funny-sounding technologies designed to nab speeders keeps growing. Fortunately, Beltronics has produced an effective, compact, and user-friendly radar detector. It's made for folks who don't want to fuss with the details, but who do want first-class protection from high-tech speed traps. By offering K- X- Ka- and even Ku-band protection -- plus protection from POP and laser detection -- the Vector 995 covers all the bases. While testing revealed some limited problems with flase alarms, this minor quibble was not enough to keep us from placing the 995 in the top tier of radar detectors, right up there with the standard-setting Escort Passport 8500 X50.

Click the image to get a closer look at the Vector 995's features. Design
While it's appropriate to make comparisons with the Escort 8500 X50, it's especially relevant here, as Escort and Beltronics, the maker of the Vector 995, recently merged all of their manufacturing and design. Apparently, many of the internal components and technology in the 995 are essentially the same as those found in the 8500, and as you'll see, our testing bears that out.

Mounting the 995 in a vehicle couldn't be easier. A small suction cup bracket slides into the unit's release mechanism and easily attaches to the windshield with light pressure. The unit is housed in a sturdy plastic case that's low profile and compact -- in fact, it's a good bit sleeker and smaller than the box-shaped 8500. The rear of the unit is dominated by a receiver window. There's also an additional laser detector window that faces the passenger compartment, which designed to detect laser signals emanating from behind the vehicle. Extra goodies include attachable blue, yellow and red faceplates that let you dress up the 995 to suit your style, as well as a softcase.

Another great attribute of the 995 is its easy control layout. Four buttons on the top of the unit control power, city...

Last updated: August 03, 2020 at 18:53 EST. Pricing information is provided by the listed merchants. GoSale.com is not responsible for the accuracy of pricing information, product information or the images provided. Product prices and availability is subject to change. Any price and availability information displayed on amazon.com or other merchants at the time of purchase will apply to the purchase of the product. As always, be sure to visit the merchant's site to review and verify product information, price, and shipping costs. GoSale.com is not responsible for the content and opinions contained in customer submitted reviews.