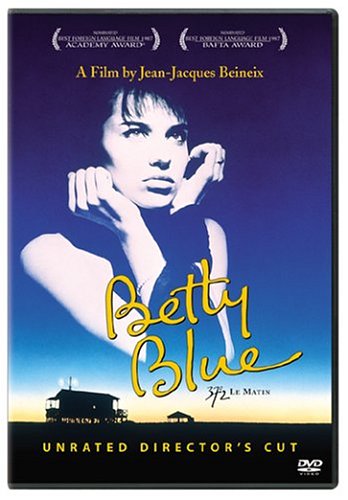 Unrated Director's Cut
Editorial Review
Sex and sunlight are on ample display in Betty Blue, director Jean-Jacques Beineix's passionate look at mad love. (Every French director is contractually required to make at least one movie about l'amour fou.) It begins at the seashore, where handyman and failed novelist Zorg (Jean-Hugues Anglade) has his life electrified by Betty, a woman whose sense of abandon frequently tips over into the pathological. This was the role that introduced gap-toothed, voluptuous Beatrice Dalle to the world, and neither Dalle nor the world has ever quite recovered. Traces of Beineix's preciousDiva are still present, though this is a darker and more memorable ride, especially in the three-hour "version integrale" that restores an hour of footage. Its copious nude scenes are a drawing card, but stick around for the age-old alchemy of life translated into art. Gabriel Yared's score is a favorite of movie-soundtrack mavens, especially its haunting piano theme. --Robert Horton

Description
Zorg lives a quiet and peaceful life, working diligently and writing in his spare time. Until Betty walks into his life, a young woman who is as beautiful as she is wild and unpredictable. When Betty's wild manners start to get out of control, Zorg is forced to watch the woman he loves slowly go insane. Featuring French Superstars Jean-Hugues Anglade, Béatrice Dalle. From Jean-Jacques Beineix, the acclaimed director of the cult art house favorite, Diva. The sexy cult classic is now available from the first time on DVD and it's the unrated director's cut! Academy Award® nomination for Best Foreign Language Film.

Set Price Alert
Set Price Alert
Read Reviews
Searching Stores
Found at 0 Stores
Last updated: February 18, 2020 at 03:02 EST. Pricing information is provided by the listed merchants. GoSale.com is not responsible for the accuracy of pricing information, product information or the images provided. Product prices and availability is subject to change. Any price and availability information displayed on amazon.com or other merchants at the time of purchase will apply to the purchase of the product. As always, be sure to visit the merchant's site to review and verify product information, price, and shipping costs. GoSale.com is not responsible for the content and opinions contained in customer submitted reviews.