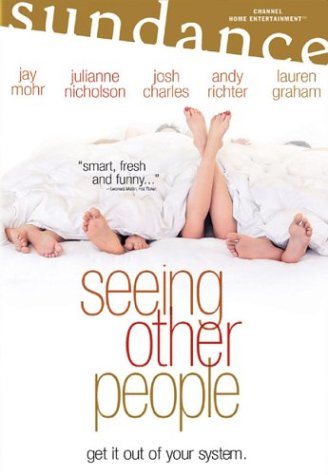 Editorial Review
A sweet and sly comedy, Seeing Other People centers around Ed (Jay Mohr, Jerry Maguire) and Alice (Julianne Nicholson, Ally McBeal), who have an idyllic relationship--so stable that, only a few months before their wedding, Alice worries that she's missed out; she's only slept with two other men before Ed. Anxious about her lack of experience, she proposes that they start seeing other people so she can have cheap, meaningless sex. But after a promising start that revitalizes their relationship, this arrangement starts spinning off in dangerous directions. Attention to psychological detail--as well as a great cast, a well-written script, and smooth, underplayed direction--keep Seeing Other People from slipping into the usual clichés of broad sex comedies. The result is clever, genuine, and enjoyable. Also featuring Andy Richter (New York Minute), Lauren Graham (The Gilmore Girls), Josh Charles (S.W.A.T.), and Helen Slater (Supergirl). --Bret Fetzer

Last updated: May 29, 2020 at 17:44 EST. Pricing information is provided by the listed merchants. GoSale.com is not responsible for the accuracy of pricing information, product information or the images provided. Product prices and availability is subject to change. Any price and availability information displayed on amazon.com or other merchants at the time of purchase will apply to the purchase of the product. As always, be sure to visit the merchant's site to review and verify product information, price, and shipping costs. GoSale.com is not responsible for the content and opinions contained in customer submitted reviews.

Find similar products to the Seeing Other People