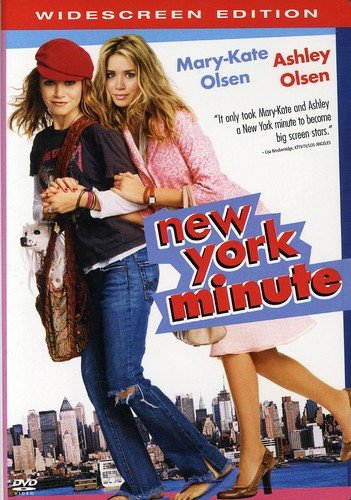 Widescreen Edition
Editorial Review
Mary-Kate and Ashley Olsen play good girl/bad girl sisters who suddenly find themselves on a high-speed chase escaping crooks, attracting hunks, and wreaking havoc in this lightweight comedy set in the Big Apple. Ashley plays high school scholar Jane Ryan, an overachiever with her sights set on winning a college scholarship competition. Mary-Kate plays her sister, Roxy, a rebellious teen truant who would rather be a rock star than a student. Since their mother's death, the sisters' relationship has been strained. Now their worlds collide when a day in Manhattan forces Jane and Roxy to join forces, overcoming their differences to battle an international smuggling ring while trying to make it in time for Jane's competition. While the script is predictably bland, viewers will enjoy the comedic strengths of Eugene Levy (Serendipity, American Pie) as Roxy's ubiquitous truant officer. Though the twins manage some decent slapstick, their sensuality, sexual innuendo, and suggestive disrobing is disappointing. DVD bonus features include some hilarious bloopers and alternate endings. (Ages 10 and older) --Lynn Gibson

Description
Mary-Kate Olsen and Ashley Olsen take their sister act to the next level with the delightful comedy New York Minute. Top student Jane Ryan (Ashley) heads to Manhattan for a college-scholarship competition. Her rebellious twin Roxy Ryan (Mary-Kate) goes along to crash a video shoot. But anything can happen - and does - in a romp involving a pursuing truant officer (Eugene Levy), a smuggler (Andy Richter), hunkalacious guys (Jared Padalecki, Riley Smith) and the girls' realization that when the chips are down, a sister can be the best friend of all.

Last updated: August 04, 2020 at 09:42 EST. Pricing information is provided by the listed merchants. GoSale.com is not responsible for the accuracy of pricing information, product information or the images provided. Product prices and availability is subject to change. Any price and availability information displayed on amazon.com or other merchants at the time of purchase will apply to the purchase of the product. As always, be sure to visit the merchant's site to review and verify product information, price, and shipping costs. GoSale.com is not responsible for the content and opinions contained in customer submitted reviews.