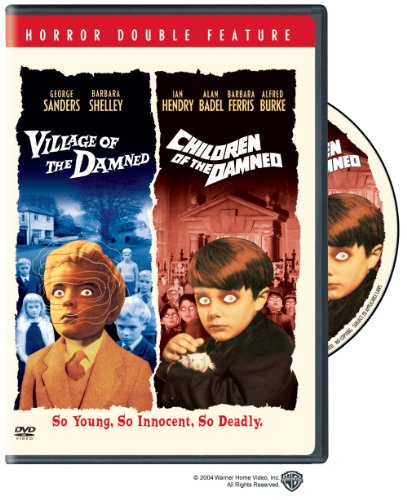 Editorial Review
What's scarier than scary kids Village of the Damned is the definitive scary-kid classic, a truly unsettling film drawn from John Wyndham's novel The Midwich Cuckoos. The brilliant opening sequence depicts the sudden and temporary paralysis of a small English hamlet, which is followed by the town's women becoming mysteriously pregnant. The spawn of this occurrence are a dozen eerie, blond-headed children, who are either gifted, evil, or "the world's new people." A splendid outing, not least in the way it catches parental anxiety about this small new stranger in one's home. (It was remade by John Carpenter in 1995.)

Children of the Damned follows up with a story about six more creepy kids, brought from all over the globe to huddle in a old church in London. An excellent opening half-hour gets bogged down in the movie's global-political ambitions (it's very much a cold war offering), but it has its share of shivery moments--the sight of the six youngsters striding down a London street as though they controlled the world is a chiller. But where's the blond hair The two films are different in tone; Village feels like a fifties sci-fi offering, with an old-school star (George Sanders) and classical style; Children is a film of the sixties, with hipper techniques, urban setting, and young actors Ian Hendry and Alan Badel. But both have those damned kids. --Robert Horton

Set Price Alert
Set Price Alert
Read Reviews
Searching Stores
Found at 0 Store
Last updated: February 17, 2020 at 06:59 EST. Pricing information is provided by the listed merchants. GoSale.com is not responsible for the accuracy of pricing information, product information or the images provided. Product prices and availability is subject to change. Any price and availability information displayed on amazon.com or other merchants at the time of purchase will apply to the purchase of the product. As always, be sure to visit the merchant's site to review and verify product information, price, and shipping costs. GoSale.com is not responsible for the content and opinions contained in customer submitted reviews.