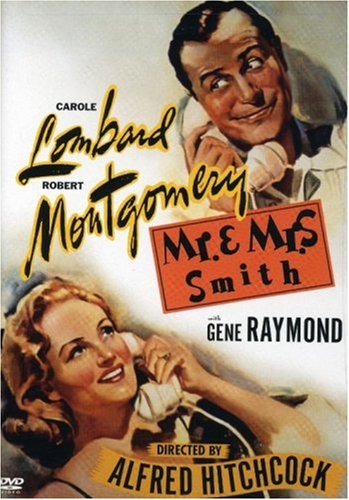 Editorial Review
Before Hollywood had entirely typecast Alfred Hitchcock as the master of suspense, with Mr. & Mrs. Smith he was allowed to fashion an elegant romantic trifle starring Robert Montgomery and Carole Lombard. It probably won't replace Rear Window or Psycho in your affections, but the film is more than a curious footnote to the director's career. The two leads play David and Ann Smith, a devoted but endlessly squabbling couple who discover their three-year marriage isn't legal. When he unexpectedly hesitates to arrange a second wedding, she storms out in a huff and soon begins dating his solid, dependable business partner Jeff (Gene Raymond). The rest follows the formula laid down by such previous screwball comedies as The Awful Truth (1937) and Bringing Up Baby (1938): David employs fair means or foul to win back Ann's heart, causes all sorts of complicated mischief, then... well, three guesses what happens in the end.

The intriguing thing about the movie is how Hitchcock takes Norman Krasna's paper-thin script and adds sly undercurrents of menace. Violence seems about to erupt in the recurring scenes where Ann shaves her husband (suggestively holding a razor up to his throat)--and there's a touch of Vertigo in one scary moment when a jammed amusement park ride leaves two characters dangling helplessly high above the ground. Montgomery and Lombard keep the mood acceptably frivolous, while indicating the flawed nature of the marital relationship. From the evidence of this one-off, Hitchcock might have been among the best comedy directors in the business, had he so wished. --Peter Matthews

Last updated: September 29, 2020 at 18:00 EST. Pricing information is provided by the listed merchants. GoSale.com is not responsible for the accuracy of pricing information, product information or the images provided. Product prices and availability is subject to change. Any price and availability information displayed on amazon.com or other merchants at the time of purchase will apply to the purchase of the product. As always, be sure to visit the merchant's site to review and verify product information, price, and shipping costs. GoSale.com is not responsible for the content and opinions contained in customer submitted reviews.