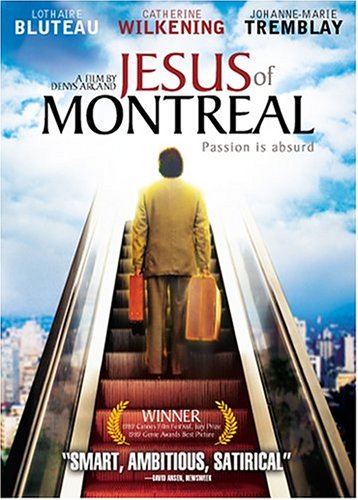 Editorial Review
What happens to the people putting on a Passion Play Someday Mel Gibson may tell us, but Denys Arcand's Jesus of Montreal proposes an engaging possibility. In hip present-day Montreal, a group of actors stages the Passion in an outdoor, somewhat avant-garde style, led by the quietly charismatic and increasingly uncanny young man (Lothaire Bluteau, Black Robe) playing Christ. His identification with the role, and the way it bleeds into real life, gives director Denys Arcand plenty of opportunities for social comment--some of it spot-on, some of it a little facile. But the fragile Bluteau is such a fascinating lead presence (the other actors are familiar from Arcand's Barbarian Invasions and Decline of the American Empire) that the movie's spell lasts long after it's over. Turns out the French-Canadian approach to the Passion can be just as intriguing as the original Aramaic. --Robert Horton

Last updated: August 04, 2020 at 09:49 EST. Pricing information is provided by the listed merchants. GoSale.com is not responsible for the accuracy of pricing information, product information or the images provided. Product prices and availability is subject to change. Any price and availability information displayed on amazon.com or other merchants at the time of purchase will apply to the purchase of the product. As always, be sure to visit the merchant's site to review and verify product information, price, and shipping costs. GoSale.com is not responsible for the content and opinions contained in customer submitted reviews.

Find similar products to the Jesus of Montreal