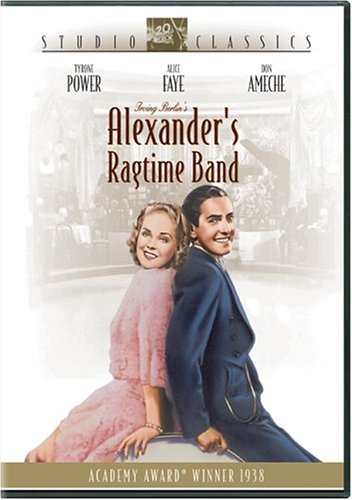 Editorial Review
The jaunty rhythms of Irving Berlin drive Alexander's Ragtime Band, an epic musical from 1938 that follows the up-and-down romance of a young bandleader (Tyrone Power, Witness for the Prosecution) and the singer he loves (Alice Faye, Tin Pan Alley) over decades. Their journey from a San Francisco honky-tonk to mass popularity is marked by classic songs like "Oh How I Hate to Get Up in the Morning," "Blue Skies," "A Pretty Girl Is Like a Melody," "Easter Parade," and the title track. Power and Faye are a little bland, but the supporting cast--including Don Ameche (Midnight), Jack Haley (the Tin Woodsman from The Wizard of Oz), and a very young Ethel Merman--give the movie some real personality, as do a few wild dance numbers. At the end, the movie becomes surprisingly suspenseful and even a little touching. --Bret Fetzer

Set Price Alert
Set Price Alert
Read Reviews
Searching Stores
Found at 0 Stores
Last updated: January 18, 2020 at 17:25 EST. Pricing information is provided by the listed merchants. GoSale.com is not responsible for the accuracy of pricing information, product information or the images provided. Product prices and availability is subject to change. Any price and availability information displayed on amazon.com or other merchants at the time of purchase will apply to the purchase of the product. As always, be sure to visit the merchant's site to review and verify product information, price, and shipping costs. GoSale.com is not responsible for the content and opinions contained in customer submitted reviews.