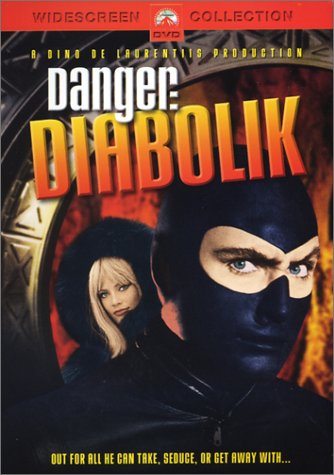 Editorial Review
Master criminal Diabolik's got it all. He's got a black leather suit and ski mask, a pair of Jaguar XKEs, gadgets galore, an underground headquarters, and of course the ravishing Eva (played by Sixties Euro-hottie Marisa Mell). Together, the two of them pull off daring capers, staying a step or two ahead of the police, the government and rival mobsters all the while. Think the Sixties Batman TV series, James Bond, Barbarella, Matt Helm, and even a bit of Austin Powers for this distinctly Sixties crime romp. Director Mario Bava, as usual, made the most out of a less-than-lavish budget, with wild sets, an Ennio Morricone score, striking photography, and a psychedelic-soaked feel all the way around, with Bava's trademark camera work making it a visual delight in many scenes. Terry-Thomas comes in as a bumbling government official (the scene where his press conference is disrupted by Diabolik's "exhilarating gas" is a classic). It's all very tongue-in-cheek fun, based as it is on a comic book from the period. John Phillip Law, of course, is no better than he ever is as the rather fey master criminal, passing off his wooden performance as "stoic", but it works. Unlike contemporaries like Bond, though, Diabolik eschews the swinging Sixties life for a happily monogamous relationship with Eva (who wouldn't). This is some goofy brain candy that's perfect for an evening of Sixties-retro fun. --Jerry Renshaw

Description
The suave, psychedelic-era thief called Diabolik (Law) can't get enough of life's good - or glittery - things. Not when there are currency shipments to steal from under the noses of snooty government officials and priceless jewels to lift from the boudoirs of the superrich. The elusive scoundrel finds plenty of ways to live up to his name in this tongue-in-cheek, live-action caper inspired by Europe's popular Diabolic comics. He clambers up walls, zaps a press conference with Exhilaration Gas, smacks a confession out of a crime lord while freefalling with him from an airplane, and pulls off the heist of a twenty-ton gold ingot.

Last updated: February 23, 2020 at 12:15 EST. Pricing information is provided by the listed merchants. GoSale.com is not responsible for the accuracy of pricing information, product information or the images provided. Product prices and availability is subject to change. Any price and availability information displayed on amazon.com or other merchants at the time of purchase will apply to the purchase of the product. As always, be sure to visit the merchant's site to review and verify product information, price, and shipping costs. GoSale.com is not responsible for the content and opinions contained in customer submitted reviews.

Find similar products to the Danger:Diabolik