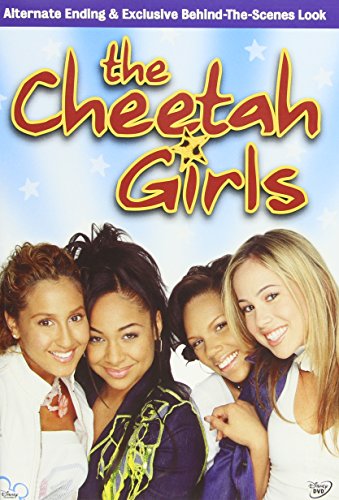 Editorial Review
Teen sensation Raven (That's So Raven) stars as Galleria Garibaldi in the Disney Channel's brightly hued adaptation of the popular book series. Produced by Whitney Houston, Josie and the Pussycats meets Destiny's Child in the form of the Cheetah Girls. Granted, they're a quartet--including Chanel (Adrienne Bailon), Aqua (Kiely Williams), and Dorinda (Sabrina Bryan)--but, like Josie's trio, they hope to make it big and, like Beyoncé, they favor exclamations like "Cheetah-licious!" After the foursome gets off to a slow start, everything starts to change when they meet producer Jackal Johnson. That's the good news. The bad is that the attention goes straight to Galleria's head (and she was never exactly lacking in self-esteem). By the end, she learns there's more to life than fame and fortune. Aimed at the tween audience, girls are likely to fall for these tuneful teens, while their parents may find all the giggling and squealing a bit much. --Kathleen C. Fennessy

Last updated: October 28, 2020 at 14:19 EST. Pricing information is provided by the listed merchants. GoSale.com is not responsible for the accuracy of pricing information, product information or the images provided. Product prices and availability is subject to change. Any price and availability information displayed on amazon.com or other merchants at the time of purchase will apply to the purchase of the product. As always, be sure to visit the merchant's site to review and verify product information, price, and shipping costs. GoSale.com is not responsible for the content and opinions contained in customer submitted reviews.

Find similar products to the The Cheetah Girls