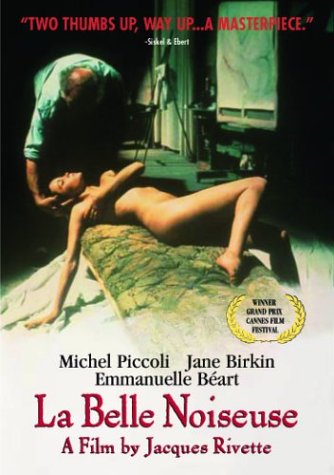 Editorial Review
La Belle Noiseuse is a thrilling and unconventional drama about the responsibility of an artist to his vision and the conflicts that arise when such responsibility is perceived as a threat to others. Michel Piccoli (Le Doulos) delivers one of his finest, most lived-in performances as Edouard Frenhofer, a famous painter living with his artist wife Liz (Jane Birkin) on a spacious estate in the French countryside. Frenhofer has lacked inspiration for a decade and has given up on painting. The idea behind his unfinished masterpiece, La Belle Noiseuse ("The Beautiful Troublemaker"), has been seemingly unattainable for a decade; Liz was the original model for it, and Frenhofer's exhaustion with the project has an emotional parallel to his dispassionate relationship with her.

Along comes a rising artist, Nicolas (David Bursztein), who suggests that his girlfriend, Marianne (Emmanuelle Béart), a writer, could help Frenhofer jumpstart the painting's completion. From this point, most of La Belle Noiseuse becomes a remarkable, seemingly unedited and privileged look at the development of a bond between artist and muse. Béart, fiercely brilliant, spends the majority of the film nude and continually molded into sometimes-painful positions as Frenhofer struggles--sketch after sketch, paint upon paint--to find something beyond the obviousness of Marianne's body. As the two struggle to meet each other halfway, Liz and Nicolas feel marginalized and jealous, putting pressure on Frenhofer to disregard such personal concerns or give in to them. Adapted by French New Wave master Jacques Rivette from a story by Honore de Balzac, the lengthy La Belle Noiseuse is fascinated by the artistic process; it is itself a patient process of watching ideas and aesthetic courage reveal themselves in the face of extraneous aversion. --Tom Keogh

Last updated: March 05, 2021 at 11:06 EST. Pricing information is provided by the listed merchants. GoSale.com is not responsible for the accuracy of pricing information, product information or the images provided. Product prices and availability is subject to change. Any price and availability information displayed on merchants at the time of purchase will apply to the purchase of the product. As always, be sure to visit the merchant's site to review and verify product information, price, and shipping costs. GoSale.com is not responsible for the content and opinions contained in customer submitted reviews.