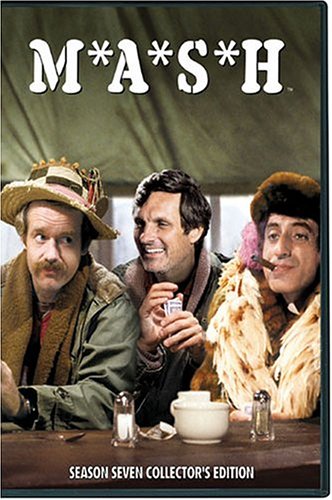 Collector's Edition
Editorial Review
The war in Korea wages on with no end in sight, but the medical corps at the 4077th valiantly battle on against soulless military bureaucracy, tedium, and insanity. The seventh season of one of television's most decorated series continued to break new ground, with episodes such as "Point of View," which unfolds under the subjective eye of a wounded soldier. And just when you think you have these characters pegged, the writers provocatively challenged them. One of the most powerful episodes of the season, and the series, is "Preventive Medicine," in which Hawkeye (Alan Alda) takes drastic measures to stop a gung-ho colonel from further endangering his men. "Inga," another series benchmark, written and directed by Alda, finds Hawkeye threatened by an accomplished woman doctor (Mariette Hartley).

Unlike Larry Linville's one-note Major Burns, David Ogden Stiers found new notes to play as Charles Emerson Winchester III. His character remains, as Hawkeye observes, "pompous, arrogant, conceited, and a total bore." But he's also "all right" in three of his finest half-hours: "Major Ego," in which he lets a magazine profile go to his swelled head; "Rally Round the Flagg, Boys," in which he outwits camp nemesis Colonel Flagg; and "Ain't Love Grand," in which he falls for a Korean girl he meets at Rosie's Bar (the setting for another essential episode, "A Night at Rosie's," in which the company seeks refuge from the war). The seven-year itch got to Gary Burghoff, who would depart the series in season 8. Episodes such as "Hot Lips Is Back in Town," in which Radar sweetly woos a new nurse, demonstrate why he would be keenly missed. The two-part "Our Finest Hour" is anything but. It is a rehash of the season 4 classic, "The Interview," that serves as a clip episode. This is a rare misstep in another satisfying season that did this series proud. --Donald Liebenson

Set Price Alert
Set Price Alert
Read Reviews
Searching Stores
Found at 0 Stores
Last updated: January 21, 2020 at 12:46 EST. Pricing information is provided by the listed merchants. GoSale.com is not responsible for the accuracy of pricing information, product information or the images provided. Product prices and availability is subject to change. Any price and availability information displayed on amazon.com or other merchants at the time of purchase will apply to the purchase of the product. As always, be sure to visit the merchant's site to review and verify product information, price, and shipping costs. GoSale.com is not responsible for the content and opinions contained in customer submitted reviews.