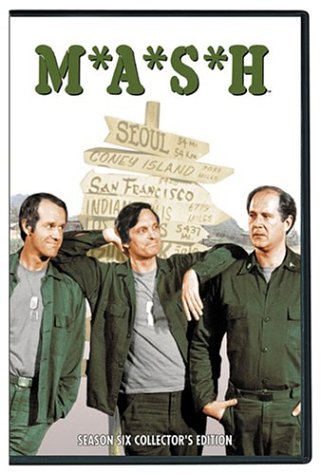 Collector's Edition
Editorial Review
From a human standpoint, things are pretty tight at the 4077th. But adding a new character to a long-embedded, close-knit ensemble is a delicate operation. By M*A*S*H's sixth season, Hawkeye (Alan Alda) and BJ (Mike Farrell) were partners in outrage against the war and army bureaucracy. With the departure of Larry Linville's Frank Burns, the much decorated series was in need of some new blood. Enter David Ogden Stiers as Charles Emerson Winchester III. Just as Henry Morgan's authoritative Col. Potter was the anti-Henry Blake, so was Charles just what the doctor ordered to give Hawkeye and BJ a worthy foil. Charles was pompous and arrogant, but, unlike Frank, he was Hawkeye's equal in the operating room. And he gave as good as was given to him, as witness the conclusion of his inaugural Emmy-nominated episode, "Fade Out, Fade In," in which he turns the tables on one of Hawkeye and BJ's reptilian practical jokes. In season 6, Gary Burghoff's Radar is mostly missing in action (he would transfer out of the series in season 8), but he figures prominently in "Fallen Idol," one of Burghoff's and Alda's finest half-hours, in which Hawkeye lashes out at Radar's "Iowa naivete" and hero worship.

The season's primary dramatic arc is Margaret's (Loretta Switt) marital woes, culminating in the Emmy-nominated two-parter, "Comrades in Arms," in which Hawkeye and Margaret, trapped by enemy fire, engage in a little close-order drill. The humanization of Margaret continues in "Temporary Duty," which also features one of the most memorable visitors to the 4077th, George "Goober" Lindsey, as the wild and wooly Roy Dupree, a temporary transfer who drives BJ and Charles crazy. Alan Arbus's psychiatrist Dr. Sidney Freedman, one of the series' most welcome recurring characters, makes a memorable return in "War of Nerves," one of his most dramatic episodes, in which a soldier Freedman sent back into combat, is unforgiving in blaming Sidney for his injuries. Two excellent ensemble episodes are "The Light That Failed, "in which the reading-starved camp shares a mystery novel, but doesn't have a clue what happens after the last page is missing, and "Mail Call Three," in which the camp reacts to news from home. Demerits again for no cast commentary, but this set once again offers viewers of the option of watching the episodes with or without a laugh track. --Donald Liebenson

Description
Relive your favorite M*A*S*H moments with this three-disc ...

Set Price Alert
Set Price Alert
Read Reviews
Searching Stores
Found at 0 Stores
Last updated: January 18, 2020 at 17:35 EST. Pricing information is provided by the listed merchants. GoSale.com is not responsible for the accuracy of pricing information, product information or the images provided. Product prices and availability is subject to change. Any price and availability information displayed on amazon.com or other merchants at the time of purchase will apply to the purchase of the product. As always, be sure to visit the merchant's site to review and verify product information, price, and shipping costs. GoSale.com is not responsible for the content and opinions contained in customer submitted reviews.