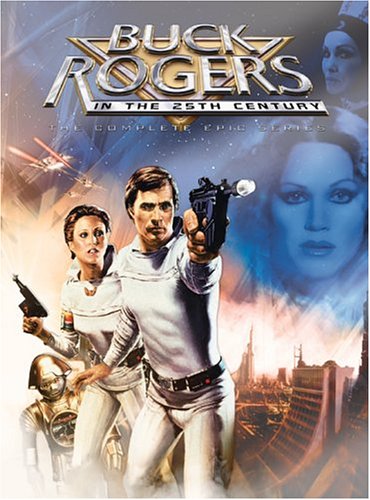 Buck Rogers in the 25th Century - The Complete Series

Buck Rogers in the 25th Century - The Complete Series

Editorial Review
With its campy combination of lightweight adventure and Spandex disco chic, Buck Rogers in the 25th Century is a nostalgic throwback to post-Star Wars opportunism. Series co-creator Glen A. Larson was incapable of originality, and former soap star Gil Gerard (in the title role) was a bland incarnation of the comic-strip hero, so the much-anticipated series premiered on September 20, 1979, with serious disadvantages. Although the two-hour pilot "Awakening" had tested successfully as a theatrical release, Gerard and the show's producers could never agree on a stable tone for the series, which presents Capt. William "Buck" Rogers as a jovial space cowboy who is accidentally time-warped from 1987 to 2491. Earth is engaged in interplanetary war following a global holocaust, and Buck's piloting skills make him an ideal starfighter recruit for the Earth Defense Directorate, where his closest colleagues are Dr. Huer (Tim O'Connor), squadron leader Col. Wilma Deering (former model Erin Gray, looking oh-so-foxy), the wisecracking robot Twiki (voiced by cartoon legend Mel Blanc), and a portable computer-brain named Dr. Theopolis, who's carried by Twiki like oversized bling-bling.

The series struggled through an awkward first season, with routine plots elevated by decent special effects and noteworthy guest stars including Jamie Lee Curtis, ill-fated Playboy Playmate Dorothy Stratten (appearing, with her voice dubbed over, less than a year before her tragic murder), Batman alumnus Julie Newmar, Buster Crabbe (veteran of vintage Buck Rogers movie serials), and several others in a show that favored vamps and vixens over credible science fiction. A full-scale overhaul resulted in a disastrous second season, but devoted fans still gravitate to Hawk (Thom Christopher), the charismatic alien "birdman" who was introduced with new characters and a new, space-faring search for lost tribes from Earth (with echoes of Larson's own Battlestar Galactica). Behind-the-scenes squabbles continued, and by mid-season of 1981, NBC pulled the plug on a breezy, still-engaging series that suffered from uneasy chemistry and never realized its full potential. Existing somewhere between Galactica and Lost in Space in the TV sci-fi food chain, this Buck--with a dearth of DVD extras--now functions as a cheesy stroll down memory lane. --Jeff Shannon

Set Price Alert
Set Price Alert
Read Reviews
Searching Stores
Found at 0 Stores
Last updated: January 17, 2020 at 08:52 EST. Pricing information is provided by the listed merchants. GoSale.com is not responsible for the accuracy of pricing information, product information or the images provided. Product prices and availability is subject to change. Any price and availability information displayed on amazon.com or other merchants at the time of purchase will apply to the purchase of the product. As always, be sure to visit the merchant's site to review and verify product information, price, and shipping costs. GoSale.com is not responsible for the content and opinions contained in customer submitted reviews.