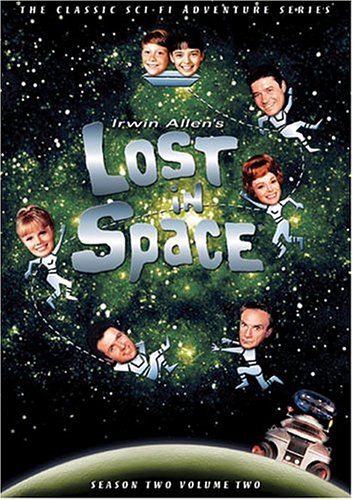 Editorial Review
As its second season progressed, and as these 14 episodes from 1967 attest, Lost in Space continued to swap science fiction for comic fantasy, and the show's ratings went into orbit. While Star Trek satisfied a smaller audience of serious sci-fi fans on NBC, Lost in Space (airing Wednesday nights on CBS) delighted a younger audience with the cheesy adventures of "Space Family Robinson," stranded on an isolated planet that nevertheless played host to an abundance of alien visitors. Here they include operatic Vikings, a disembodied mechanical head, a spacefaring buccaneer, a Scottish bagpiper in a haunted castle, and, in the deliriously entertaining episode "Revolt of the Androids," a silver-painted super-being whose primary purpose is to "Crush...Kill...Destroy!!" It's all harmless family fun, offering equal amounts of tongue-in-cheek whimsy and some scary highlights that kids, then and now, will find instantly unforgettable.

Yes, it all looks quaint and innocent by present-day standards, and it's painfully obvious that series creator Irwin Allen didn't know what to do with the Robinson clan, a wooden variant of Ozzie & Harriett in V-necked velour, with June Lockhart playing happy homemaker while patriarch Guy Williams spent most of his time repairing damaged equipment. It's just as well, since season 2 is dominated by the scene-stealing duo of Dr. Smith (played by Jonathan Harris in the role he was born to play) and the sarcastic Robot B-9, who plays a scolding R2D2 to Harris's duplicitous, flamboyantly feckless C3PO, the latter delivering alliterative insults (like "you ingot of ingratitude!" and "you nickel-plated nincompoop!") in virtually every episode. Guest stars like Albert Salmi, Al "Grandpa Munster" Lewis, and John Carradine are in on the game, adding weekly flavor to a series that shares much in common with such later kid-stuff as H.R. Pufnstuf and Land of the Lost. Some may find it hopelessly ridiculous in retrospect, but Lost in Space still offers fun aplenty for those who enjoy its anything-goes approach to low-budget fantasy for the young and young-at-heart. Unfortunately for devoted fans, vintage 1966 radio interviews with Lockhart, Williams, and Harris are the only extras in this well-mastered four-disc set. --Jeff Shannon

Last updated: February 28, 2020 at 12:55 EST. Pricing information is provided by the listed merchants. GoSale.com is not responsible for the accuracy of pricing information, product information or the images provided. Product prices and availability is subject to change. Any price and availability information displayed on amazon.com or other merchants at the time of purchase will apply to the purchase of the product. As always, be sure to visit the merchant's site to review and verify product information, price, and shipping costs. GoSale.com is not responsible for the content and opinions contained in customer submitted reviews.

Find similar products to the Lost in Space - Season 2, Vol. 2