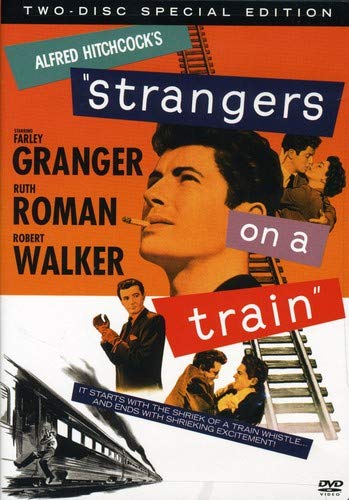 Two-Disc Special Edition
Editorial Review
From its cleverly choreographed opening sequence to its heart-stopping climax on a rampant carousel, this 1951 Hitchcock classic readily earns its reputation as one of the director's finest examples of timeless cinematic suspense. It's not just a ripping-good thriller but a film student's delight and a perversely enjoyable battle of wits between tennis pro Guy (Farley Granger) and his mysterious, sycophantic admirer, Bruno (Robert Walker), who proposes a "criss-cross" scheme of traded murders. Bruno agrees to kill Guy's unfaithful wife, in return for which Guy will (or so it seems) kill Bruno's spiteful father. With an emphasis on narrative and visual strategy, Hitchcock controls the escalating tension with a master's flair for cinematic design, and the plot (coscripted by Raymond Chandler) is so tightly constructed that you'll be white-knuckled even after multiple viewings. Strangers on a Train remains one of Hitchcock's crowning achievements and a suspenseful classic that never loses its capacity to thrill and delight. --Jeff Shannon

Description
En route from Washington, D.C., champion tennis player Guy Haines (Farley Granger) meets pushy playboy Bruno Anthony (Robert Walker). What begins as a chance encounter turns into a series of morbid confrontations, as Bruno manipulates his way into Guy's life. Bruno is eager to kill his father and knows Guy wants to marry a senator's daughter (Ruth Roman) but can't get a divorce from his wife. So Bruno suggests the men swap murders, which would leave no traceable clues or possible motives. Though Guy refuses, it won't be easy to rid himself of the psychopathic Bruno. Hitchcock's daughter Patricia appears in this film. The extra features included on the DVD are: Alternate 'preview' version of the film; Commentary by director Peter Bogdanovich, Psycho screenwriter Joseph Stephano, Strangers on a Train author Patricia Highsmith and biographer Andrew Wilson; New making-of documentary Strangers on a Train: A Hitchcock Classic, with Farley Granger, film historian Richard Schickel, Patricia Hitchcock O'Connell and other Hitchcock family members and colleagues recalling the making of this suspense landmark; Three intriguing featurettes: The Hitchcocks on Hitch, Strangers on a Train: The Victim's P.O.V., Strangers on a Train by M. Night Shyamalan; Alfred Hitchcock's Historical Meeting, a vintage newsreel.

Last updated: February 27, 2020 at 13:46 EST. Pricing information is provided by the listed merchants. GoSale.com is not responsible for the accuracy of pricing information, product information or the images provided. Product prices and availability is subject to change. Any price and availability information displayed on amazon.com or other merchants at the time of purchase will apply to the purchase of the product. As always, be sure to visit the merchant's site to review and verify product information, price, and shipping costs. GoSale.com is not responsible for the content and opinions contained in customer submitted reviews.