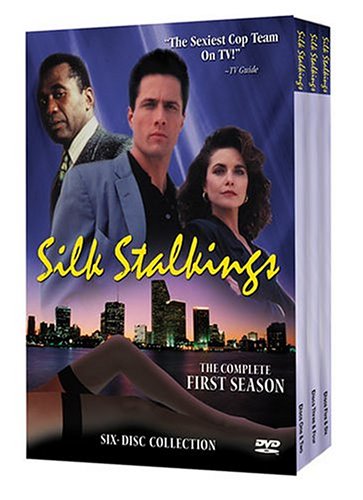 Editorial Review
Created by Stephen J. Cannell (The Rockford Files, 21 Jump Street, among others), the USA Network's Silk Stalkings was about as sexy as non-premium cable TV got in the early 1990s. Palm Beach homicide detectives Rita Lee Lance (Mitzi Kapture) and Chris Lorenzo (Rob Estes) investigate crimes they call "silk stalkings," murders that expose the seamy--and steamy--side of high society. Rita and Chris investigate the crimes, frequently by going undercover (so to speak) to expose macho men or their beautiful women companions, who tend to lounge about in swimwear or lingerie. During the first season, the detectives face ghosts from their pasts and push the edge of their profession (Ben Vereen plays their exasperated captain, a role later filled by Charlie Brill), all the while swapping sexual innuendo but dating other people with disappointing results. The platonic-partners schtick is nothing The X-Files or Moonlighting didn't do with more style, but the stars did have a chemistry that in later years their replacements were never able to re-Kapture.

In addition to the 22 episodes, the DVD set features 39 minutes of interviews with Cannell, an almost unrecognizable Estes, a straight-haired Kapture (both stars talk about each other, their departures, and other cast members), and a nostalgic Vereen, plus a joint reminiscence between Cannell and Vereen. --David Horiuchi

Set Price Alert
Set Price Alert
Read Reviews
Searching Stores
Found at 0 Stores
Last updated: January 22, 2020 at 17:22 EST. Pricing information is provided by the listed merchants. GoSale.com is not responsible for the accuracy of pricing information, product information or the images provided. Product prices and availability is subject to change. Any price and availability information displayed on amazon.com or other merchants at the time of purchase will apply to the purchase of the product. As always, be sure to visit the merchant's site to review and verify product information, price, and shipping costs. GoSale.com is not responsible for the content and opinions contained in customer submitted reviews.