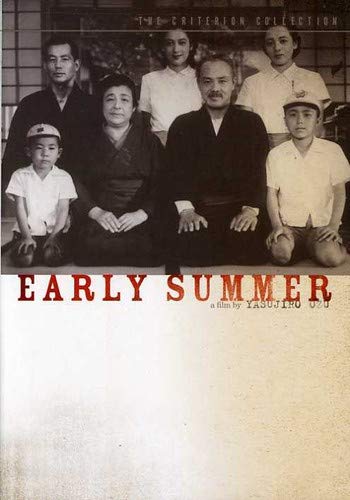 Editorial Review
Like any of Yasujiro Ozu's best-known films, Early Summer is a marvel of cinematic simplicity, revealing layers of depth through multiple viewings. It may seem at first that Ozu's family tale is too simple, but looks are deceiving, and closer study reveals an intensely structured, highly formalized example of Ozu's transcendental realism, focusing on the dilemma of 28-year-old Noriko (played by the immensely popular Setsuko Hara), whose late-breaking decision to marry sends unexpected shock waves through three generations of her close-knit family. While providing a vivid portrait of liberated womanhood in post-war Japan, this lighthearted yet quietly devastating drama also serves as a gentle study of tradition vs. modernity, and a clash between conformity and independence. It's also a triumph of DVD-as-film-school: As he did for Criterion's release of A Story of Floating Weeds, the distinguished scholar Donald Richie provides an eloquent full-length commentary as valuable as the film itself, thoroughly exploring the purpose of Ozu's low-angle style, the influence of Ernst Lubitsch, the importance of Setsuko as a role model for Japanese girls, stylistic comparison to Jane Austen's fiction, and a variety of other relevant topics. "Ozu's Films from Behind the Scenes" gathers three of Ozu's longtime collaborators for affectionate reminiscence, and mini-essays by Ozu expert David Bordwell and long-time Ozu admirer Jim Jarmusch lend further appreciation from critical and personal perspectives. This is Criterion's fifth Ozu release on DVD, and like the others, it's highly recommended. --Jeff Shannon

Description
A nuanced examination of a family falling apart, Early Summer tells the story of the Mamiya family and their efforts to marry off their headstrong daughter, Noriko, played by the extraordinary Setsuko Hara. A seemingly simple story, it is among the director's most emotionally complex. The Criterion Collection is proud to present one of Ozu's most enduring classics.

Set Price Alert
Set Price Alert
Read Reviews
Searching Stores
Found at 0 Stores
Last updated: January 24, 2020 at 21:45 EST. Pricing information is provided by the listed merchants. GoSale.com is not responsible for the accuracy of pricing information, product information or the images provided. Product prices and availability is subject to change. Any price and availability information displayed on amazon.com or other merchants at the time of purchase will apply to the purchase of the product. As always, be sure to visit the merchant's site to review and verify product information, price, and shipping costs. GoSale.com is not responsible for the content and opinions contained in customer submitted reviews.