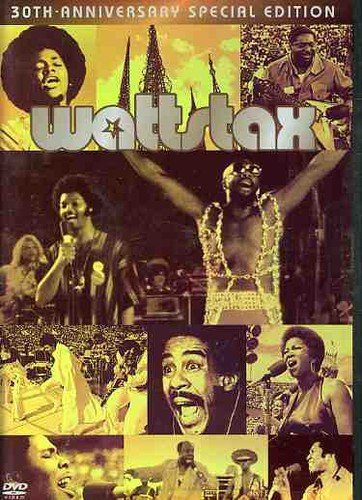 Editorial Review
They called Wattstax the "black Woodstock," but there are many differences between that seminal hippie event and the 1972 concert documented in this 30th-anniversary special-edition reissue. Woodstock was all about peace, love, and music. Wattstax, held three years later in Los Angeles, had those elements as well; but as this 103-minute film reminds us, it was a more socio-politically charged event, with its emphasis on black pride and the simple opportunity for African Americans to assert that, in opening speaker Jesse Jackson's words, "I am somebody." There's also a good deal less music in this film than in the Woodstock movie. As the title suggests, a host of great Stax Records artists (including Rufus and Carla Thomas, the Bar-Kays, the Staple Singers, Albert King, and show closer Isaac Hayes) performed, but much of Wattstax doesn't even take place inside the L.A. Coliseum, where the concert was held, but rather in the churches and shops and on the streets of Watts itself (music fans would be better off checking out the Wattstax double CD). Wattstax, in fact, is much less a music movie than a chronicle of black life seven years after the Watts race riots, as well as what comedian Richard Pryor (who delivers several hilarious but scathing bits) calls "a soulful expression of the black experience." --Sam Graham
[+] Read More

Set Price Alert
Set Price Alert
Read Reviews
Searching Stores
Found at 0 Stores
Last updated: January 29, 2020 at 02:27 EST. Pricing information is provided by the listed merchants. GoSale.com is not responsible for the accuracy of pricing information, product information or the images provided. Product prices and availability is subject to change. Any price and availability information displayed on amazon.com or other merchants at the time of purchase will apply to the purchase of the product. As always, be sure to visit the merchant's site to review and verify product information, price, and shipping costs. GoSale.com is not responsible for the content and opinions contained in customer submitted reviews.