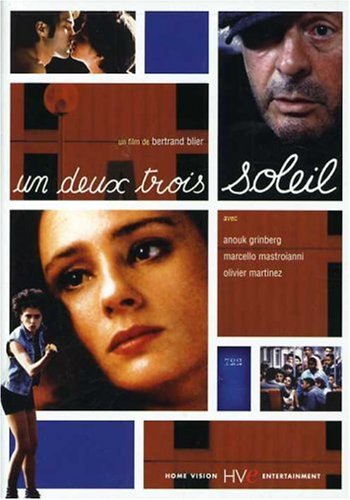 Editorial Review
For cinephiles who enjoy experimental storytelling, Un, Deux, Trois, Soleil offers a fascinating movie experience. While providing a tour-de-force showcase for French actress Anouk Grinberg, director Bertrand Blier defies conventional narrative in telling the troubled story of Victorine, a young woman from the tenements of Marseilles whose life is comprised (at various ages from 12 to 25, all played by Grinberg) of a series of surreal incidents that take on the unsettling quality of a fever dream. Social conventions are reversed, moral codes are rendered anarchic (e.g., burglary is encouraged), and linear chronology is replaced by a timeline that leaps forward and back on a whim, leaving the viewer deliberately disoriented, with none of the familiar reference points for following the story. But there's a method to Blier's cinematic madness: Not only is the film beautifully photographed and brilliantly acted (with a cast including Marcello Mastroianni and then-newcomer Olivier Martinez), but there's a kind of frazzled logic to Blier's depiction of lost innocence, social corruption, and borderline insanity. It's not for all tastes, but Un, Deux, Trois, Soleil (the name of a schoolyard game in the film) is a challenging drama that rewards attentive viewers. --Jeff Shannon

Description
From acclaimed director Bertrand Blier (Get Out Your Handerchiefs, Too Beautiful for You) comes Un Deux Trois Soleil, the dreamlike tale of Victorine, a young girl growing up in the slums of Marseilles with her alcoholic father (Marcello Mastroianni - star of Federico Fellini's La Dolce Vita and 8 1/2), and her crazy mother. Bizarre and surreal at the same time, reminiscent of Buñuel and Fellini, Un Deux Trois Soleil is innovative, outrageous, and a triumph for Mastroianni, in one of his most unusual roles. The film also features Olivier Martinez (Taking Lives, Unfaithful) in his breakthrough role for which he won the 1994 César Award for Most Promising Actor.

Set Price Alert
Set Price Alert
Read Reviews
Searching Stores
Found at 0 Stores
Last updated: January 22, 2020 at 18:52 EST. Pricing information is provided by the listed merchants. GoSale.com is not responsible for the accuracy of pricing information, product information or the images provided. Product prices and availability is subject to change. Any price and availability information displayed on amazon.com or other merchants at the time of purchase will apply to the purchase of the product. As always, be sure to visit the merchant's site to review and verify product information, price, and shipping costs. GoSale.com is not responsible for the content and opinions contained in customer submitted reviews.