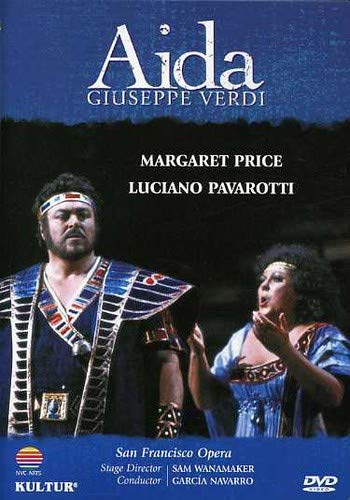 Editorial Review
This spectacular 1981 San Francisco production of Aida, directed by Sam Wanamaker, boasts production values more commonly associated with Hollywood to portray scenes from the time of the Pharaohs, notably a striking interior for the temple of Vulcan from where Radames is sent forth on his mission to conquer the invading Ethiopian army. With Margaret Price in the title role and Luciano Pavarotti as Radames, there is much going for this version, both musically and visually.

Price and Pavarotti are in superb voice throughout. Pavarotti sings his initial aria, "Celeste Aida", very much as a showpiece, ignoring Verdi's quadruple pianissimo ending for the very opposite, milking (dare one say it) the audience for a thunderous round of applause, which he duly receives. Initial doubts about his commitment to the drama, however, are dispelled in Act 3 when he denies Amneris his hand and bids farewell to life entombed in the same temple from where he'd once been sent forth as conqueror. Price may not be a natural actress, but her singing throughout, particularly in the concluding farewell with Pavarotti ("O terra, addio"), is very touching. Stefania Toczyska is a compelling Amneris and never more so than when she's offering Radames a lifeline at the start of the last act. Brian Large's direction for video homes in on the salient points of the drama and also picks up on an uncomfortable looking extra or two in the "Grand March" where space on stage seems at a premium. With assured conducting from Garcia Navarro, this Aida is a very desirable acquisition. --Adrian Edwards

Description
In this San Francisco Opera production, Verdi’s enduring masterpiece of musical theatre, Aida, is a marvellous blend of human emotion and grand spectacle, full of Egyptian pomp and pageantry. In Sam Wanamaker’s lavish production, highly acclaimed for its extraordinary musical performances, Margaret Price is outstanding as the Ethiopian slave, Aida, Luciano Pavarotti makes a triumphant debut in the role of Radames, commander of the Egyptian Army, and the entire performance is masterfully shaped by the Spanish conductor, García Navarro.

Set Price Alert
Set Price Alert
Read Reviews
Searching Stores
Found at 0 Stores
Last updated: January 29, 2020 at 03:01 EST. Pricing information is provided by the listed merchants. GoSale.com is not responsible for the accuracy of pricing information, product information or the images provided. Product prices and availability is subject to change. Any price and availability information displayed on amazon.com or other merchants at the time of purchase will apply to the purchase of the product. As always, be sure to visit the merchant's site to review and verify product information, price, and shipping costs. GoSale.com is not responsible for the content and opinions contained in customer submitted reviews.