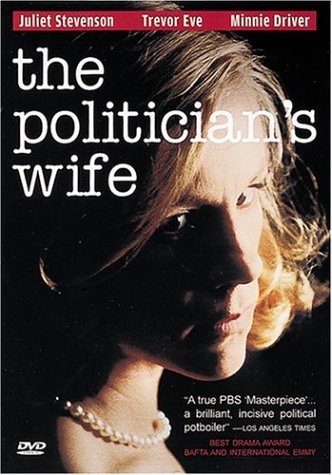 Editorial Review
Flora (Juliet Stevenson in a tour de force performance) is the politician's wife. The politician, in this smart, unconventional thriller, is Tory MP Duncan Matlock (Troy's Trevor Eve). The setting is 1990s Britain. When they met, Duncan was a nobody, while Flora was from money. She married for love... and thought he did, too. Over the years, he became a powerful leader and she was always by his side. Then she--along with the rest of the nation--finds out he's been cheating. The woman (Minnie Driver) is an escort girl. Flora is devastated, but decides to put up a brave front. Secretly, however, she embarks on an ingenious plan to regain everything she's lost: pride, dignity, identity. There are no guns or knives in this award-winning miniseries (just a little nudity and profanity). Featuring a first-rate cast, including the late Ian Bannen (Waking Ned Devine) as the lynchpin in Flora's plan. --Kathleen C. Fennessy

Description
When the tabloids scream the news that Minister of the Family Duncan Matlock has been caught in an affair with an "escort" girl, no one is more stunned than Flora, his wife. As her husband and the Tory establishment behind him expect, Flora maintains her loyal façade. But behind her public smiles, she seethes with mounting fury. Employing strange sexual games and covert political tactics, she plots to exact the ultimate revenge against her husband and the system that created him.

Set Price Alert
Set Price Alert
Read Reviews
Searching Stores
Found at 0 Stores
Last updated: January 22, 2020 at 18:30 EST. Pricing information is provided by the listed merchants. GoSale.com is not responsible for the accuracy of pricing information, product information or the images provided. Product prices and availability is subject to change. Any price and availability information displayed on amazon.com or other merchants at the time of purchase will apply to the purchase of the product. As always, be sure to visit the merchant's site to review and verify product information, price, and shipping costs. GoSale.com is not responsible for the content and opinions contained in customer submitted reviews.

Find similar products to the The Politician's Wife