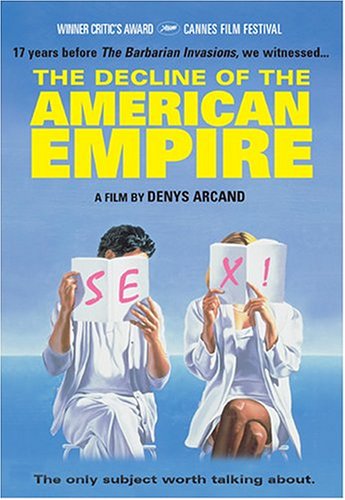 The Decline of the American Empire

The Decline of the American Empire

Editorial Review
You've never seen a sex comedy quite like The Decline of the American Empire. That's because there's no sex in this comedy--just a lot of entertaining talk about it (and a few discreet flashbacks). The speakers are eight Montreal academics. For most of the film, the men--Rémy (Rémy Girard), Claude (Yves Jacques), Pierre (Pierre Curzi), and Alain (Daniel Brière)--fix dinner while talking about sex. The women--Dominique (Dominique Michel), Louise (Dorothée Berryman), Diane (Louise Portal), and Danielle (Geneviève Rioux)--work out while talking about sex. That evening, they all gather for dinner... and talk about sex. The Decline of the American Empire made the reputation of writer-director Denys Arcand, but his greatest success would arrive 17 years later with The Barbarian Invasions. In that 2003 Oscar-winner, Arcand revisits the lovably loquacious characters from the first film, all of whom are older, wiser--and just as obsessed with sex. --Kathleen C. Fennessy
[+] Read More

Set Price Alert
Set Price Alert
Read Reviews
Searching Stores
Found at 0 Stores
Last updated: January 22, 2020 at 19:22 EST. Pricing information is provided by the listed merchants. GoSale.com is not responsible for the accuracy of pricing information, product information or the images provided. Product prices and availability is subject to change. Any price and availability information displayed on amazon.com or other merchants at the time of purchase will apply to the purchase of the product. As always, be sure to visit the merchant's site to review and verify product information, price, and shipping costs. GoSale.com is not responsible for the content and opinions contained in customer submitted reviews.

Find similar products to the The Decline of the American Empire