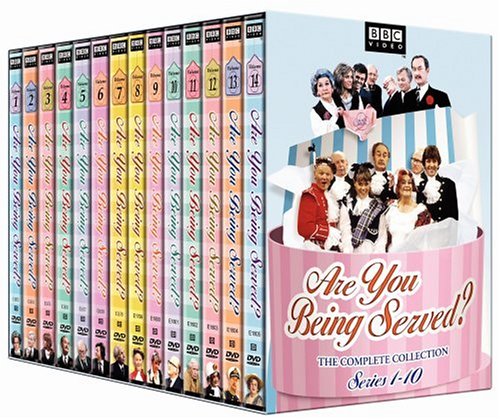 Are You Being Served The Complete Collection (Series 1-10, 14 Volumes) Are You Being Served The Complete Collection (Series 1-10, 14 Volumes)

Editorial Review
The definitive British sitcom is almost certainly Are You Being Served, which depicts the squabbles, misadventures, and flirtations of the staff of Grace Brothers department store. The show was originally conceived as a vehicle for an irreverent junior salesman named Mr. Lucas (Trevor Bannister), but it soon became clear that mocking a social hierarchy isn't half as funny as taking it all too seriously. The show really revolves around Mrs. Slocombe (Mollie Sugden), whose wildly changing hair color and mercurial moods terrorize the rest of the staff, and cheerful but sly Mr. Humphries (the effervescent John Inman), one of the first gay characters on television treated with dignity--or at least no more indignity than anyone else (the show makes some noise about not being sure if Mr. Humphries is gay or not, but no one in the audience will have any question). But the rest of the cast is superb as well: Frank Thornton as the elegant but leering floorwalker Capt. Peacock, Wendy Richard as the sexy, impish Miss Brahms, Arthur Brough as cantankerous Mr. Grainger (who, sadly, died after the fifth season; other characters took his position on the sales staff, but never quite matched up), and Nicholas Smith as the self-serving but incompetent manager Mr. Rumbold form a comic ensemble that has rarely been equaled.

These characters, written with affection and played with superb comic dash, endlessly jockey for status and salary while simultaneously creating an alternative family (the core structure for any sitcom on either side of the Atlantic). Are You Being Served deserves its devoted fan base, who will revel in this comprehensive 14-DVD box set (which includes specials about Inman, Sugden, and Richard, as well as other extras). --Bret Fetzer

Last updated: May 28, 2020 at 12:13 EST. Pricing information is provided by the listed merchants. GoSale.com is not responsible for the accuracy of pricing information, product information or the images provided. Product prices and availability is subject to change. Any price and availability information displayed on amazon.com or other merchants at the time of purchase will apply to the purchase of the product. As always, be sure to visit the merchant's site to review and verify product information, price, and shipping costs. GoSale.com is not responsible for the content and opinions contained in customer submitted reviews.

Find similar products to the Are You Being Served The Complete Collection (Series 1-10, 14 Volumes)