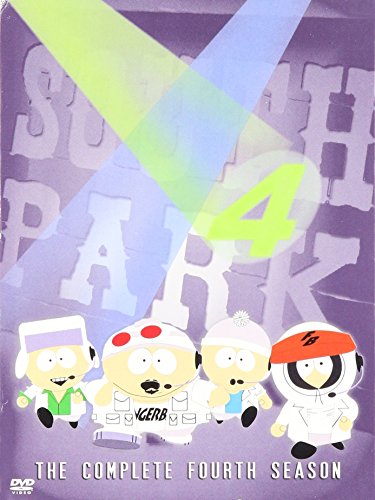 Editorial Review
In the episode "Chef Goes Nanners," Cartman is left standing alone in the snow after Wendy blithely proclaims her improbable attraction for him to has suddenly vanished. Cartman heaves a heavy sigh, and exits Chaplinesque stage right. But any concerns that South Park creators Trey Parker and Matt Stone had gone soft, or that Cartman would undergo a more sympathetic, Louie De Palma-like makeover are abated in nearly every other episode of South Park's pivotal fourth season. From the "downright immature" trashing of Phil Collins (whose "You'll Be in My Heart" from Tarzan had emerged victorious Oscar night over Parker and Stone's "Blame Canada") to an episode in which Cartman becomes the unwitting poster child for NAMBLA, South Park gave its viewers much shock value for its basic cable dollar. This was the season that introduced the show's most unlikely breakout star, the wheelchair-bound Timmy, who, despite being only able to say his own name (or perhaps because of it), carried the pathos in his own holiday special, "Helen Keller! The Musical." This was the season in which Parker and Stone somehow were able to comment with Daily Show immediacy on the Elian Gonzales incident ("Quintuplets 2000") and the presidential election debacle ("Trapper Keeper") within days of the actual events. This was the season in which other "statement shows" skewered the South Carolina confederate flag controversy ("Chef Goes Nanners") and hate-crime legislation ("Cartman's Silly Hate Crime 2000"). This was also the season in which the South Park kids graduated to the fourth grade, we got a harrowing look inside Cartman's brain ("Helen Keller!"), and estranged lovers Saddam Hussein and Satan were reunited (in a two-parter, no less!).

Episodes not appreciated in their time can now be seen with fresh eyes. "Pip," hosted by Malcolm McDowell, and featuring none of the South Park regulars, is a faithful abridgement of Charles Dickens's Great Expectations, monkey robots notwithstanding. As in the season 3 set, Parker and Stone provide brief, "fun-size commentary" that address their censorship skirmishes with Comedy Central and illuminate the inspiration and backstory for each episode. To quote the pro-commercialism holiday episode, "A Very Krappy Christmas," "If we all buy presents, everyone benefits." For South Park fans, this boxed set is an excellent start. --Donald Liebenson

Last updated: June 05, 2020 at 14:58 EST. Pricing information is provided by the listed merchants. GoSale.com is not responsible for the accuracy of pricing information, product information or the images provided. Product prices and availability is subject to change. Any price and availability information displayed on amazon.com or other merchants at the time of purchase will apply to the purchase of the product. As always, be sure to visit the merchant's site to review and verify product information, price, and shipping costs. GoSale.com is not responsible for the content and opinions contained in customer submitted reviews.