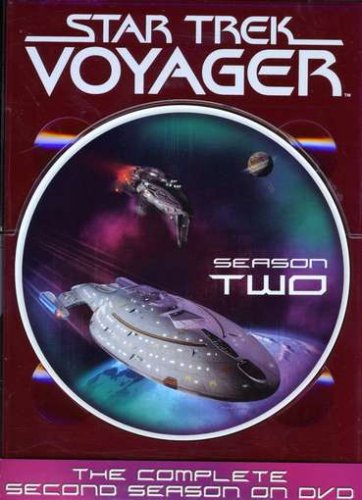 Editorial Review
If the first season of Star Trek: Voyager was a shakedown cruise, then season 2 represents a vital blossoming of the series' potential. As Captain Janeway, Kate Mulgrew maintained Starfleet integrity in the lawless expanse of the Delta quadrant, and became the ethical conscience of her still-uneasy Maquis/Starfleet crew, whose unanimous loyalty would be dramatically proven in "The '37's" (a first-season hold-over). Janeway's moral guidance would also assert itself in "Death Wish" (a "Q" episode featuring NextGen's Jonathan Frakes) and "Tuvix," in which life-or-death decisions landed squarely on her shoulders. Season 2 brought similar development to all the primary characters, deepening their relationships and defining their personalities, especially Robert Beltran as Chakotay (in "Initiations" and "Tattoo"), now firmly established as Janeway's best friend (and nearly more than that, in "Resolutions") and command-decision confidante.

Solid sci-fi concepts abound in season 2, although "Threshold" is considered an embarrassment (as confessed by co-executive producer Brannon Braga in a self-deprecating "Easter Egg" interview clip). It was a forgivable lapse in a consistently excellent season that intensified Janeway's struggle with the villainous Kazon, exacerbated by a Starfleet traitor in cahoots with the duplicitous Cardassian Seska (played by Martha Hackett, featured in a lively guest-star profile). The psychologically intense "Meld" (featuring a riveting guest performance by Brad Dourif) was a Tuvok-story highlight, and the aptly titled "Basics, Pt. 1" provided an ominous cliffhanger, including a second planetary landing (in a season full of impressive special effects) that left Voyager's fate in question. DVD extras are abundant and worthwhile, especially the season 2 retrospective and "A Day in the Life of Ethan Phillips" (who plays Neelix under a daily ordeal of latex makeup). Several Easter egg surprises--including a music video performance by Tim Russ (Tuvok)--are hidden (but easily found) among the "Special Features" menus on disc 7. All in all, this was one of Voyager's finest seasons, leaving some enticing questions to be answered in season 3. --Jeff Shannon

Last updated: June 04, 2020 at 11:23 EST. Pricing information is provided by the listed merchants. GoSale.com is not responsible for the accuracy of pricing information, product information or the images provided. Product prices and availability is subject to change. Any price and availability information displayed on amazon.com or other merchants at the time of purchase will apply to the purchase of the product. As always, be sure to visit the merchant's site to review and verify product information, price, and shipping costs. GoSale.com is not responsible for the content and opinions contained in customer submitted reviews.