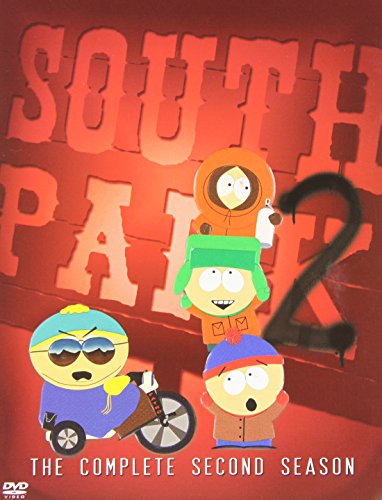 Editorial Review
Now that enough time has lapsed, we can all have a good laugh over South Park creators Trey Parker and Matt Stone's amusing little April Fools prank, in which they kicked off the show's second season not with the conclusion to season one's cliffhanger that would reveal the identity of Cartman's father, but with an all-Terrance, all-Phillip, all-farting episode, "Not Without My Anus." The ensuing outcry illustrated just how seriously its devoted fans take South Park. There is little evidence of sophomore slump in this three-disc collection of 18 episodes that continue the coming-of-age trials of third graders Stan, Kyle, Cartman, and Kenny. There is considerable shock value just in the episode titles alone, among them "Cojoined Fetus Lady," "Merry Christmas, Charlie Manson," and the infamous "Cartman's Mom Is Still a Dirty Slut." But mostly, the episodes are just--in Cartman's words--hella funny. "Spookyfish" is a creepfest about a killer fish, possessed animals, and alien alter egos (in which the so-called Evil Cartman is much nicer than the real Cartman) presented in Spookyvision, with pictures of Barbra Streisand framing the screen. "Chef's Salty Chocolate Balls" is a hilarious send-up of the Sundance Film Festival and the indie film scene that marks the return of Mr. Hankey, the Christmas Poo, and ends with the burial of Robert Redford in excrement.

As always, hard-earned life lessons provide South Park with fertile territory for skewed and subversive social commentary. In "Chicken Lover," Ayn Rand's Atlas Shrugged is an argument against literacy. "Underwear Gnomes" makes a strong case for corporate takeover of local family business. It is difficult to respect Warner Bros.' "authoritah" with the scant DVD extras. There are no commentaries, but Parker and Stone are present to introduce most of the episodes, each of which they proclaim to be their favorite. But their incarnations as abusive retirement center entertainers and as the hosts of an all-bacon cooking show fall flat. Bring back Rootin'-Tootin' Trey Parker and Pistol-Slingin' Matt Stone from the Season One set! --Donald Liebenson

Last updated: May 26, 2020 at 08:11 EST. Pricing information is provided by the listed merchants. GoSale.com is not responsible for the accuracy of pricing information, product information or the images provided. Product prices and availability is subject to change. Any price and availability information displayed on amazon.com or other merchants at the time of purchase will apply to the purchase of the product. As always, be sure to visit the merchant's site to review and verify product information, price, and shipping costs. GoSale.com is not responsible for the content and opinions contained in customer submitted reviews.