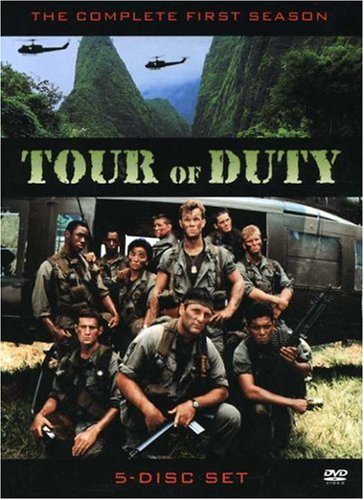 Editorial Review
The first television series to depict the American soldier in combat during the Vietnam War, producer Zev Braun's Emmy-nominated Tour of Duty earned critical acclaim during its three-season run. Judging by the number of Internet sites devoted to the program, it also remains a fan favorite more than a decade after its 1989 cancellation; said fans should be pleased with this five-disc set, which compiles the entire 1987 debut season in a slightly altered format. What's untouched on this set is the drama and tension endured by the men of Company B, a racially and socially diverse platoon led by Sgt. Zeke Anderson (Terence Knox), as they serve their twelve-month tour in 1967. The 21 episodes of the first season (largely helmed by veteran TV writer-director Bill W.L. Norton) take the platoon from their formation at Firebase Ladybird ("Pilot") to the brutal battle to take Hill 1000 ("The Hill") that concludes the season on a downbeat note. What's missing, as longtime fans will immediately note, is the theme song (the Rolling Stones' "Paint It Black") and much of the vintage rock music that played throughout the series. They've been replaced by generic (if effective) library tracks, which may lessen the impact of certain favorite scenes for viewers familiar with the broadcast versions. Also, no other extras are available on the disc, which is a slight disappointment, but for fans, simply having the entire first season might be satisfying enough. --Paul Gaita

Last updated: October 28, 2020 at 15:15 EST. Pricing information is provided by the listed merchants. GoSale.com is not responsible for the accuracy of pricing information, product information or the images provided. Product prices and availability is subject to change. Any price and availability information displayed on amazon.com or other merchants at the time of purchase will apply to the purchase of the product. As always, be sure to visit the merchant's site to review and verify product information, price, and shipping costs. GoSale.com is not responsible for the content and opinions contained in customer submitted reviews.