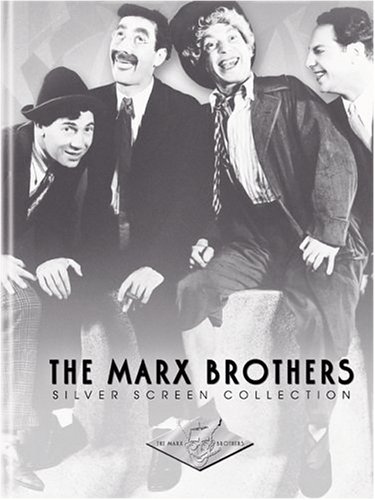 The Cocoanuts / Animal Crackers / Monkey Business / Horse Feathers / Duck Soup
Editorial Review
There will be a debate of which 2004 DVD collection of Marx Brothers films was better. This Universal release of the better known Paramount-produced films are the only ones starring all four brothers: Groucho, Chico, Harpo, and Zeppo. The Warner collection contains less-vital films, but is loaded with extras and commentaries. The Universal collection contains only 20 minutes of interviews from NBC's Today Show--interesting but short--with Harpo, Groucho, and Harpo's son Bill from the '60s and '70s. All of the films in this collection were released on DVD by Image Entertainment in 2000 and the prints look the same, which isn't necessarily bad; one just wishes a major restoration had been undertaken.

The films--packaged handsomely with a booklet--are essential Marx Brothers, their first five films made from 1929 to 1933. The least timeless is their first, The Cocoanuts, based on their Broadway hit. The film--one of the first full talkies--takes place in a hotel with owner Groucho out to grab every dollar. Animal Crackers is the brothers' first classic, a lickety-split comedy about an art theft being investigated by Groucho's alter-image, Captain Spaulding. For introducing youngsters to the work of Marx, Monkey Business is the best way. The shenanigans start right at the start as the brothers stowaway on a luxury liner. It's their first film that wasn't based on a play, as they endeavored to find new material. Horse Feathers gave them more fertile ground plus a sure-fire Hollywood director at the helm (Norman McLeoad). Their fantasia of college life includes the riotous football-game finale. Music, always a key part of their plays and films is given more weight here and includes Groucho's theme, "I'm Against It." Music is again key as the musicals of the era are spoofed in the brothers' undisputed masterpiece, Duck Soup. From a land called Fredonia, Groucho plays a slapdash ruler who rewrites the rules of governing, leading to a most memorable war with Sylvania (so war gets lampooned. too). Duck Soup also boasts the most famous Marx brothers sketch: Groucho trying to fool his mirror. --Doug Thomas

Description
Celebrate the 75th anniversary of the greatest comedy act in history with The Marx Brothers Silver Screen Collection. This essential DVD set features the legendary four Marx Brothers in five of their most acclaimed and best loved films - Duck Soup, Horse...

Set Price Alert
Set Price Alert
Read Reviews
Searching Stores
Found at 0 Stores
Last updated: January 23, 2020 at 03:25 EST. Pricing information is provided by the listed merchants. GoSale.com is not responsible for the accuracy of pricing information, product information or the images provided. Product prices and availability is subject to change. Any price and availability information displayed on amazon.com or other merchants at the time of purchase will apply to the purchase of the product. As always, be sure to visit the merchant's site to review and verify product information, price, and shipping costs. GoSale.com is not responsible for the content and opinions contained in customer submitted reviews.