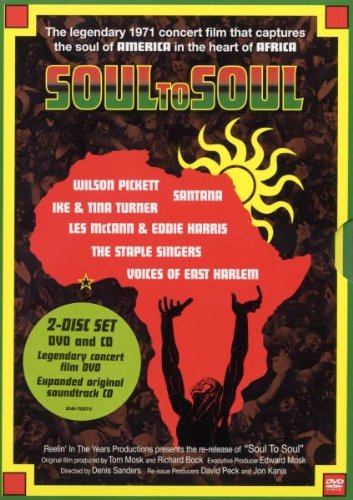 DVD with Soundtrack CD
Editorial Review
Explosive performances by Ike & Tina Turner, Wilson Pickett, Santana, the Staple Singers, and others power Soul to Soul, the filmed documentary of a 1971 concert by American artists in Accra, Ghana. There's some great music here, with versions of "Land of 1000 Dances" (Pickett), "When Will We Be Paid" (the Staples), and "The Price You Gotta Pay to Be Free" (jazzmen Les McCann and Eddie Harris, who also feature the amazing African musician Amoah Azangeo) that are as good or better than anything found on other concert films from the period, including Wattstax and Woodstock. But witnessing this predominantly black group of Americans as they respond to being in Africa for the first time is fascinating and moving as well (check out the uncontained emotion of Ike Turner, just one of the nine folks who supplied voice-over commentary for the DVD, to see just how profound an experience it was), to say nothing of the sometimes bemused, often ecstatic response of the African audience. 5.1 surround notwithstanding, the sound can be a little dodgy, but the remastered, restored film, which includes plenty of non-concert documentary footage (including a trip to a seaside "castle" from which slaves were shipped across the Atlantic) looks good, and what's on the film looks first rate. --Sam Graham

Description
On March 6, 1971, some of the greatest artists in popular music history traveled from the United States to Ghana, West Africa, to take part in a 14-hour musical celebration, Soul To Soul. Over 100,000 enthusiastic locals gathered for this unique cultural exchange between two continents. This award-winning film combines classic concert performances with scenes documenting the artists getting in touch with their roots as they return to the cultural motherland. SOUL TO SOUL chronicles this historic event and is considered by many to be one of the greatest music films of all time. Now available for the first time on DVD, this 2-disc set features the 95-minute, full-length feature film, newly remastered and restored from the original 35mm negative by the Grammy Foundation. The second disc features a remastered and expanded original soundtrack (also making its debut on CD), including performances not featured in the film.

Set Price Alert
Set Price Alert
Read Reviews
Searching Stores
Found at 0 Store
Last updated: January 24, 2020 at 20:39 EST. Pricing information is provided by the listed merchants. GoSale.com is not responsible for the accuracy of pricing information, product information or the images provided. Product prices and availability is subject to change. Any price and availability information displayed on amazon.com or other merchants at the time of purchase will apply to the purchase of the product. As always, be sure to visit the merchant's site to review and verify product information, price, and shipping costs. GoSale.com is not responsible for the content and opinions contained in customer submitted reviews.