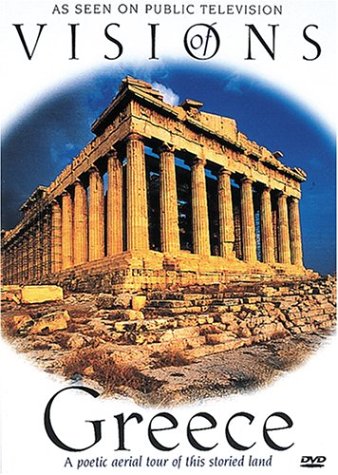 Editorial Review
Using the same high-definition photography and smooth, airborne camerawork that yielded popular aerial tours of British Columbia and Ireland on PBS, Visions of Greece is a gorgeous and haunting overview of mainland Greece and, more exotically, the Greek Isles. Between the two programs on this disc, the title show and its sequel, Visions of Greece: Off the Beaten Path, it's easy to find this Cradle of Civilization--birthplace of democracy, classical arts, and the jury system--not only inspiring but staggeringly beautiful. Take in a gull's eye view of the startling Temple of Poseidon, high above the blue-blue Aegean Sea. Swoop over the white beaches and famous windmills on Mikonos island, see the marble lions overlooking the site of Apollo's mythic birth on Delos, and be amazed by the First Circle of the Royal Tombs, the reputed home (and possible tomb) of Agamemnon and his family from hell. --Tom Keogh

Description
A breathtakingly beautiful virtual tour shot in high definition from a helicopter-mounted camera. Lifting off from Athens, you embark on a modern odyssey as varied and dramatic as Greek history, exploring exotic islands scattered like stones in the brilliant blue Aegean, ancient ruins, verdant hills, rocky coastlines, and timeless traditions. The dramatic view is enhanced by a soundtrack of traditional and modern Greek music and a narrative that celebrates Greek history and mythology. With nearly an hour of bonus footage not seen on public television.
Includes these programs:
Visions of Greece--Travel from Corfu to Crete, Meteora to Mikonos, the Peloponnese, Rhodes, Santorini, Thessaloniki, and many other glorious destinations along the way.
Visions of Greece: Off the Beaten Path--Features the unusual, the unexpected, and the incomparable. See the smoldering crater of the Nissiros volcano, ancient marketplaces, hilltop towns, old fishing villages, and much more!

Last updated: May 28, 2020 at 12:23 EST. Pricing information is provided by the listed merchants. GoSale.com is not responsible for the accuracy of pricing information, product information or the images provided. Product prices and availability is subject to change. Any price and availability information displayed on amazon.com or other merchants at the time of purchase will apply to the purchase of the product. As always, be sure to visit the merchant's site to review and verify product information, price, and shipping costs. GoSale.com is not responsible for the content and opinions contained in customer submitted reviews.

Find similar products to the Visions of Greece