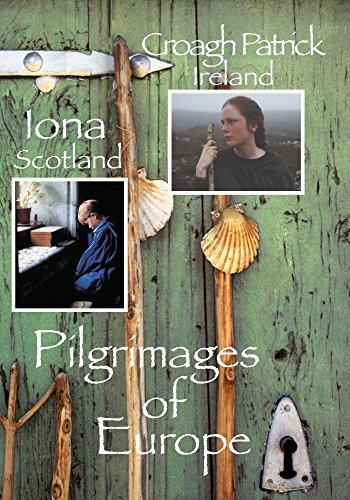 CROAGH PATRICK, Ireland
In the 4th century A.D. the monk Patrick travelled to pagan Ireland to convert the Irish to Christianity. Patrick won the population over by integrating venerated pagan symbols, like the sun, into the Christian faith. Croagh Patrick, a mountain on Ireland’s wild western coast, is such a symbol. During a dispute with the druids, Patrick was challenged to fast for forty days and forty nights on their holy mountain. "Our gods will destroy you," they threatened. Patrick accepted their challenge. After forty days and nights on the mountain, he made his descent, none the worse for wear. From then onward, his influence grew by leaps and bounds. To this day Saint Patrick remains the patron saint of Ireland. Every Irishman climbs Croagh Patrick at least once in his life, as his ancestors did even before the dawn of the Christian era.

IONA, Scotland
A small island off the western coast of Scotland was of vital importance to the earliest years of the Christianization of England and Northern Europe. An Irish monk named Columba came to Iona in the 6th century to spread the Christian faith. Right up to the present day, many pilgrims have followed and continue to follow in Columba’s footsteps. The journey to Iona is a long one. Since there is no direct connection by boat from the mainland, one must travel via the island of Mull. As Iona comes into view, one can also see the outline of the old abbey, which is where the present community of Iona is housed. Hundreds of people stay at the abbey during their visit, and it is an ever-changing population, an ecumenical community. Most of the guests stay here for a week, to study, to talk and to pray and meditate amidst the peace and quiet of the island.

Last updated: May 28, 2020 at 13:16 EST. Pricing information is provided by the listed merchants. GoSale.com is not responsible for the accuracy of pricing information, product information or the images provided. Product prices and availability is subject to change. Any price and availability information displayed on amazon.com or other merchants at the time of purchase will apply to the purchase of the product. As always, be sure to visit the merchant's site to review and verify product information, price, and shipping costs. GoSale.com is not responsible for the content and opinions contained in customer submitted reviews.