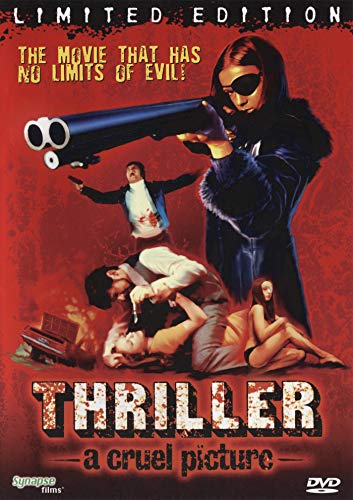 Editorial Review
This is the film that Quentin Tarantino (Director, KILL BILL VOL. 1 & 2, PULP FICTION, RESERVOIR DOGS) called "the roughest revenge movie ever made!"… THRILLER – A CRUEL PICTURE is finally making its U.S. DVD debut in this Uncensored Limited Edition. With only 25,000 units in the total DVD production run, this cult gem will soon be gone forever! Order now so you don’t miss out on THE exploitation DVD release of the year!

Growing up mute after a childhood sexual assault, a young girl (played by beautiful cult starlet Christina Lindberg) spends years working on a remote farm. After missing the bus one day, she is picked up by a suave young man who takes her out to dinner, drugs her and forces her into a life of drug addiction and prostitution.

Torn away from home, she rebels against her captor only to have one of her eyes gouged out as punishment (in a scene rumored to have been filmed with an actual corpse). After learning of the death of her parents and fed up with the cards life has dealt, she trains herself in the fine arts of fighting, killing and revenge. Transformed into a one-woman killing machine (and armed with a sawed-off shotgun), she uses her new skills to enact bloody revenge on those who have done her wrong.

Synapse Films has painstakingly restored THRILLER – A CRUEL PICTURE from original vault materials to bring you the totally uncensored version of the ultimate revenge-exploitation movie! Originally released in the U.S. in a heavily truncated form as THEY CALL HER ONE EYE, THRILLER is presented here with all the graphic sex, violence and action intact. Over 20 minutes of additional footage has been restored!

Set Price Alert
Set Price Alert
Read Reviews
Searching Stores
Found at 0 Stores
Last updated: January 22, 2020 at 19:04 EST. Pricing information is provided by the listed merchants. GoSale.com is not responsible for the accuracy of pricing information, product information or the images provided. Product prices and availability is subject to change. Any price and availability information displayed on amazon.com or other merchants at the time of purchase will apply to the purchase of the product. As always, be sure to visit the merchant's site to review and verify product information, price, and shipping costs. GoSale.com is not responsible for the content and opinions contained in customer submitted reviews.

Find similar products to the Thriller - A Cruel Picture