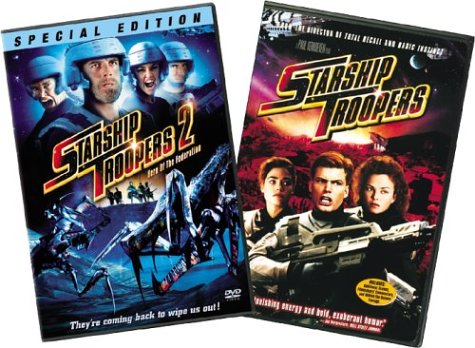 Special Edition Two Pack
Editorial Review
Starship Troopers
In the first and finest RoboCop movie, director Paul Verhoeven combined near-future science fiction with a keen sense of social satire--not to mention enough high-velocity violence to satisfy even the most voracious bloodlust. In Starship Troopers, Verhoeven and RoboCop cowriter Ed Neumeier take inspired cues from Robert Heinlein's classic sci-fi novel to create a special-effects extravaganza that functions on multiple levels of entertainment. The film might be called "Melrose Place in Space," with its youthful cast of handsome guys and gorgeous women who look like they've been recruited (and in some cases they were) from the cast of Beverly Hills 90210. Viewers might focus on the incredible, graphically intense action sequences (definitely not for children) in which heavily armed forces from Earth go to off-world battle against vast hordes of alien "bugs" bent on planetary conquest. The attacking bugs are marvels of state-of-the-art special-effects technology, and the space battles are nothing short of spectacular. But Starship Troopers is more than a showcase for high-tech hardware and gigantic, flesh-ripping insects. Recalling his childhood in Holland during the Nazi occupation, Verhoeven turns this epic adventure into a scathingly funny satire of fascist propaganda, emphasizing Heinlein's underlying warning against the hazards of military conformity and the sickening realities of war. It's an action-packed joy ride if that's all you're looking for, but Verhoeven has a provocative agenda that makes Starship Troopers as smart as it is exciting.

Starship Troopers 2: Hero of the Federation
Allowing for all the low-budget shortcomings that plague any straight-to-video production, Starship Troopers 2: Hero of the Federation serves up 92 minutes of passable sci-fi action. Parlaying his veteran status as an animator, special-effects wizard, and stalwart survivor of the CGI revolution, Phil Tippett (with returning screenwriter Ed Neumeier) makes a woefully uninspired directorial debut with this makeshift sequel to Paul Verhoeven's 1997 blockbuster, retaining the jarhead militarism of Robert Heinlein's original novel while serving up more bugs, an all-new cast of attractive young stars, and all-too-familiar plot elements borrowed from a dozen better movies. "Bigger is better" is out of the question under such meager budgetary circumstances, so Tippett and Neumeier compensate with gruesome...

Last updated: February 25, 2020 at 16:16 EST. Pricing information is provided by the listed merchants. GoSale.com is not responsible for the accuracy of pricing information, product information or the images provided. Product prices and availability is subject to change. Any price and availability information displayed on amazon.com or other merchants at the time of purchase will apply to the purchase of the product. As always, be sure to visit the merchant's site to review and verify product information, price, and shipping costs. GoSale.com is not responsible for the content and opinions contained in customer submitted reviews.