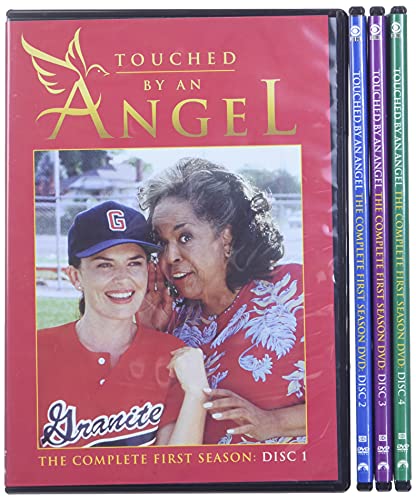 Touched by an Angel - The Complete First Season Touched by an Angel - The Complete First Season

Editorial Review
Touched by an Angel wasn't the first TV show with a heavenly theme, but it set a new standard for a compassionate portrayal of Christian themes on television. Roma Downey, with flowing brunette locks and a soft Irish lilt, plays Monica, a divine case-worker sent from town to town to lend an angelic hand. Sometimes it's as simple as helping a dying man reach out to those he loves before it's too late; sometimes she has to face the Devil himself--in the closing episode of the first season, Monica is sent to make sure an AIDS hospice opens despite the opposition of white supremacists being led by Satan (played by John Schneider, formerly of The Dukes of Hazzard). Earthy Della Reese plays Tess, Monica's supervisor, who takes an active role in quite a few cases. Touched by an Angel is unlikely to persuade dubious viewers to join the faith, but though all episodes resolve themselves through the intervention of God and his divine messengers, the show's view of humanity has hope and dignity.

Touched by an Angel also features an impressive array of guest stars, ranging from country music star Randy Travis to Academy Award winner Cloris Leachman (The Last Picture Show) to Marion Ross (Happy Days); one episode, about a radio talk-show host fighting with her teenage daughter, features Melissa Joan Hart (Sabrina the Teenage Witch), James Marsden (X-Men), and Jack Black (School of Rock), all before their careers took off. Touched by an Angel: The Complete First Season has the first 13 episodes from 1994-95 and, as a bonus, the two-part series finale from 2003. --Bret Fetzer

Description
TOUCHED BY AN ANGEL – THE COMPLETE FIRST SEASON delivers inspiration in the form of Monica (Downey), Tess (Reese) and Andrew (Dye), three angels dispatched from heaven to inspire people who are at a crossroads in their lives. Features notable guest appearances by Randy Travis, Phylicia Rashad and Malcolm-Jamal Warner,

Set Price Alert
Set Price Alert
Read Reviews
Searching Stores
Found at 0 Stores
Last updated: January 22, 2020 at 17:28 EST. Pricing information is provided by the listed merchants. GoSale.com is not responsible for the accuracy of pricing information, product information or the images provided. Product prices and availability is subject to change. Any price and availability information displayed on amazon.com or other merchants at the time of purchase will apply to the purchase of the product. As always, be sure to visit the merchant's site to review and verify product information, price, and shipping costs. GoSale.com is not responsible for the content and opinions contained in customer submitted reviews.