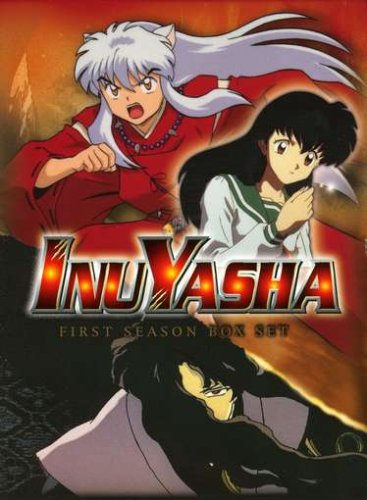 Based on the manga by Rumiko Takahashi, the creator of Ranma 1/2 and Urusei Yatsura, the Inu-Yasha TV series (2000) blends elements of Japanese folklore and familiar anime devices into a deftly imaginative blend of humor and adventure, an extremely entertaining series that never falls into clich. Beginning the first season's 27 episodes, Kagome Higurashi, a normal 15-year-old girl, falls down a dry well--and finds herself in the feudal past, 50 years after her ancestress Kikyo imprisoned the half-human/half-demon Inu-Yasha. As the reincarnation of Kikyo, Kagome possesses a magic jewel that greatly increases the power of demons. Kagome fetters Inu-Yasha with the help of her priestess-ancestor Kaede, and when the jewel is shattered Kagome and Inu-Yasha must ally to recapture the fragments.

The series really begins to hit its stride when Kagome and Inu-Yasha, while bickering, nevertheless prove an effective team against the demons they encounter in the Warring States netherworld. Two new characters create complications. Shippo, an orphan fox spirit, meets Kagome and Inu-Yasha in the Warring States period. A more conventional but potentially more dangerous addition is Hojo, a handsome upper classman at Kagome's school, who's concerned about her recent absences. His understated good manners contrast sharply with the prickly Inu-Yasha--just as Kagome is beginning to recognize his good points.

In the multi-part adventure that begins with "Kikyo's Stolen Ashes," the filmmakers presenting conflicting versions of the relationship between Kikyo and Inu-Yasha, and the intriguing plot twists typify Takahashi's sophisticated story-telling. The tone darkens as the back story emerges: 50 years earlier, Kikyo tended Onigumo, a badly burned thief. As his desire for the Sacred Jewel--and Kikyo--grew, Onigumo summoned a horde of demons, whom he allowed to consume his flesh and soul. The evil creatures fused to form the terrible Naraku. Recognizing his feelings for Kagome, Inu-Yasha tries to protect her from Naraku by sending her back to her own time and blocking the passage between the ages. Inu-Yasha, Kagome, Shippo, and Miroku face a bizarre array of monsters and villains, including a forest demon who vomits hordes of monstrous, three-eyed wolves.

As the tapestry grows richer, Kagome and Myoga begin to explore the origins and nature of the Sacred Jewel that radiates power yet brings misfortune to everyone who approaches it. The source of the jewel turns out to be the...
[+] Read More

Set Price Alert
Set Price Alert
Read Reviews
Searching Stores
Found at 0 Store
Last updated: January 18, 2020 at 01:54 EST. Pricing information is provided by the listed merchants. GoSale.com is not responsible for the accuracy of pricing information, product information or the images provided. Product prices and availability is subject to change. Any price and availability information displayed on amazon.com or other merchants at the time of purchase will apply to the purchase of the product. As always, be sure to visit the merchant's site to review and verify product information, price, and shipping costs. GoSale.com is not responsible for the content and opinions contained in customer submitted reviews.