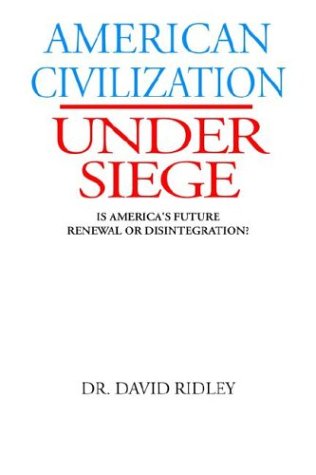 Editorial Review
This book examines the massive assault on American civilization by the left within America, and by other civilizations hostile to the United States. It describes the challenges facing our great civilization, and recommends what we can do to ensure its survival.

Part II, The Siege, identifies the domestic and foreign enemies of American Civilization. It describes how American culture and order are under attack by a number of left-wing groups, and how America's instrument of expansion is diminishing. One chapter is devoted to describing the growth of tyranny within America as a result of liberal socialist control of the federal government and other institutions. The extent of treachery against the United States by liberal-socials, primarily under the Clinton administration, with respect to giving aid and comfort to such enemies as Communist China is examined. America's Age of Conflict is described in terms of the class and racial conflicts that exist, and many examples of the irrationality infecting our society are presented. The decay that permeates American society is compared to the decay that afflicted the Roman Republic, and the Roman Empire. The invasion of America by the Third World is described in detail, and the deliberate failure to defend America's borders by both the Clinton and Bush administrations is examined.

Last updated: January 15, 2021 at 19:45 EST. Pricing information is provided by the listed merchants. GoSale.com is not responsible for the accuracy of pricing information, product information or the images provided. Product prices and availability is subject to change. Any price and availability information displayed on ebay.com or other merchants at the time of purchase will apply to the purchase of the product. As always, be sure to visit the merchant's site to review and verify product information, price, and shipping costs. GoSale.com is not responsible for the content and opinions contained in customer submitted reviews.

Find similar products to the American Civilization Under Siege