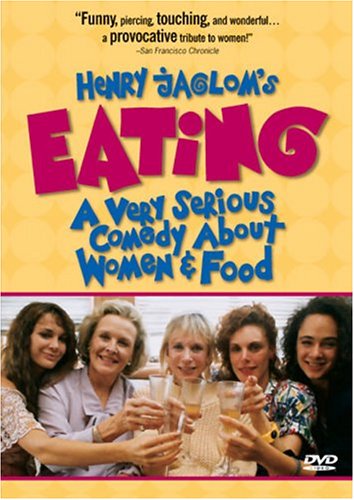 Editorial Review
Long before Sex and the City, Henry Jaglom (Déjà Vu) directed this chatty exposé on women and body image. Sure, there's some talk about men and relationships, but the film's upper-class California females spend most of their time discussing weight and dieting (with stops along the way for plastic surgery, bulimia, and abortion). The occasion is a multiple-birthday party for Kate (Mary Crosby), who is turning 30, Helene (Lisa Richards), who is turning 40, and Sadie (Marlena Giovi), who is turning 50. Subtitled A Very Serious Comedy about Women and Food, Eating plays like a low-budget cross between The Decline of the American Empire and The Anniversary Party. As with the rest of Jaglom's oeuvre, the tone is as self-conscious as Woody Allen, the approach as loose as John Cassavetes. If it doesn't quite hit those heights, Eating provides--if you'll pardon the pun--plenty of food for thought. --Kathleen C. Fennessy

Description
From Henry Jaglom (Going Shopping, Last Summer in the Hamptons), recognized by the Los Angeles Times as "the definitive independent, one of America’s most important filmmakers," comes a sophisticated modern comedy about women, love, neuroses and the food that binds them all… Henry Jaglom’s EATING! At a fashionable party in Southern California, a parade of women hilariously mingle and muse on their body image hang-ups, eating disorders, and the love-hate relationship between femmes and food.

Set Price Alert
Set Price Alert
Read Reviews
Searching Stores
Found at 0 Stores
Last updated: January 23, 2020 at 20:53 EST. Pricing information is provided by the listed merchants. GoSale.com is not responsible for the accuracy of pricing information, product information or the images provided. Product prices and availability is subject to change. Any price and availability information displayed on amazon.com or other merchants at the time of purchase will apply to the purchase of the product. As always, be sure to visit the merchant's site to review and verify product information, price, and shipping costs. GoSale.com is not responsible for the content and opinions contained in customer submitted reviews.

Find similar products to the Eating