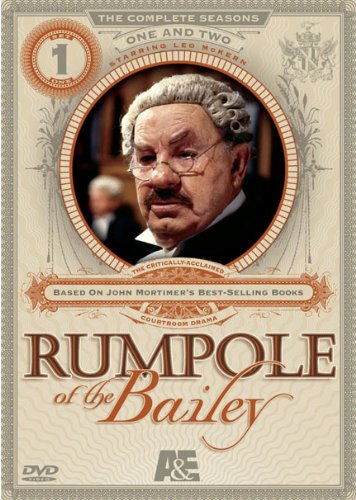 Rumpole of the Bailey - The Complete First and Second Seasons

Rumpole of the Bailey - The Complete First and Second Seasons

Editorial Review
Before there was Quincy and The Practice, there was Rumpole. Rumpole of the Bailey is, quite simply, one of the finest television series, and it has served as a model for all law dramas that followed it. Edgy and satirical, Rumpole is based on John Mortimer's books of the same name. A determined and committed criminal defense barrister (whose clients have included three generations of the Timson family, among others) at the Old Bailey (criminal court), esteemed actor Leo McKern portrays the antihero Rumpole. As champion of the downtrodden, the self-righteous Rumpole loves to get in trouble with his wife Hilda, his peers, the head of chambers, and judges, to name but a few. A connoisseur of Wordsworth, cigars, and cheap liquor, McKern's usually disheveled Rumpole belies the character's dry sense of humor and astute skill as a barrister. The upwardly mobile Hilda is played by Peggy Thorpe-Bates, known for her Miss Toliver in Alcatraz Island, and Justice Sir Guthrie Fetherston is played by Peter Bowles, known for his Richard DeVere in TV's To the Manor Born.

Typical of British drama, production values are low while the caliber of scriptwriting and acting is unsurpassed. A rare example of a television serial that is as appealing and engaging on its 10th viewing as it was on its first. --Erik Macki

Description
Today’s legal minds could take a lesson or two from Horace Rumpole, one of the most colorful characters ever to approach the bench. Rumpole also maneuvers behind the scenes, using his brilliant mind and sly sense of humor to make his case. Stylishly played by Leo McKern, he throws the courtroom into an uproar for twenty episodes that seamlessly blend comedy, mystery, and drama.

Set Price Alert
Set Price Alert
Read Reviews
Searching Stores
Found at 0 Stores
Last updated: January 19, 2020 at 16:49 EST. Pricing information is provided by the listed merchants. GoSale.com is not responsible for the accuracy of pricing information, product information or the images provided. Product prices and availability is subject to change. Any price and availability information displayed on amazon.com or other merchants at the time of purchase will apply to the purchase of the product. As always, be sure to visit the merchant's site to review and verify product information, price, and shipping costs. GoSale.com is not responsible for the content and opinions contained in customer submitted reviews.