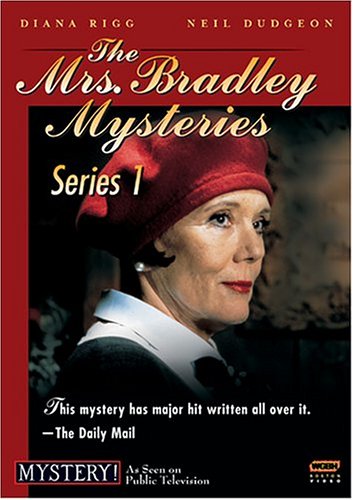 Speedy Death / The Mrs. Bradley Mysteries
Editorial Review
This free adaptation of Gladys Mitchell's classic crime novel Speedy Death as a vehicle for a full-blooded performance by Diana Rigg as the louche 1920s analyst Mrs. Bradley is a splendid piece of period drama with an intriguing puzzle at its heart. Mrs. Bradley attends the engagement party of her crippled goddaughter Eleanor, only to find the home of her old beau, Eleanor's father Bing (John Alderson), a hotbed of intrigue and sudden death. Eleanor's unsatisfactory fiancé Everard is found drowned in the bath after quarrelling with the former suitor whose bad driving crippled Eleanor; someone tries to shoot the fiancée of Eleanor's brother Gorde. Full of memorable characters like the sinister housekeeper Mrs. McNamara (Lynda Baron), Speedy Death is an impressive feature-length curtain-raiser to a popular series. For once, a detective has to investigate a crime where she has something seriously at stake--her sense of her own past and her own friends. --Roz Kaveney

Diana Riggs glides through The Mrs. Bradley Mysteries like a true grand dame. Set in 1920s England, this mystery series wallows in swank cars, jaunty tunes, well-cut clothes, and extravagant hats--and every so often, Riggs turns to the camera and delivers sardonic observations with a wicked purr. Aided by her chauffer George Moody (Neil Dudgeon), scandalous divorcie Mrs. Bradley (Riggs) solves murders with her keen observations and psychological insight (along with a little pickpocketing and genteel extortion). Saucy storylines abound: Death at the Opera mixes lesbianism at a girls' school with a bread-slicing machine; The Rising of the Moon features knife-throwers, dwarves, and a hall of mirrors; in Laurels Are Poison, ghosts kill with poison-tipped arrows; and in The Worsted Viper, the revival of an ancient virgin-sacrificing cult threatens Moody's own daughter. The mysteries are more stylish than fair in their presentation of clues; anyone looking for a puzzle to solve will be frustrated as crucial information is withheld until after Mrs. Bradley has brought the villain to justice. But the heart of the show is the delightful rapport between Rigg and Dudgeon, which will win over any fan of British mysteries. --Bret Fetzer

Set Price Alert
Set Price Alert
Read Reviews
Searching Stores
Found at 0 Stores
Last updated: January 19, 2020 at 17:51 EST. Pricing information is provided by the listed merchants. GoSale.com is not responsible for the accuracy of pricing information, product information or the images provided. Product prices and availability is subject to change. Any price and availability information displayed on amazon.com or other merchants at the time of purchase will apply to the purchase of the product. As always, be sure to visit the merchant's site to review and verify product information, price, and shipping costs. GoSale.com is not responsible for the content and opinions contained in customer submitted reviews.