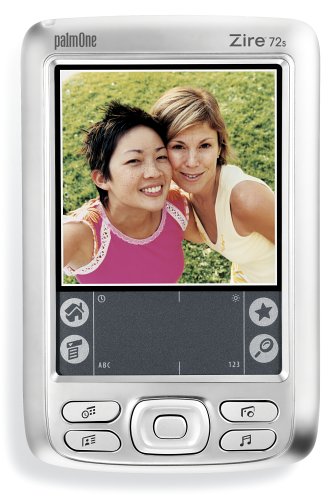 Silver
Features:
Editorial Review
Building on the success of PalmOne's Zire 71, the Zire 72 is the first Palm-based handheld that can capture digital video with sound and shoot digital still photos. This special silver version of the Zire 72 also features bright 320 x 320-pixel color screen for optimal playback of video and photos as well as voice recording capability and an MP3 player for listening to your own soundtrack. Other features include Bluetooth wireless connectivity, a 32 MB memory, Secure Digital card expansion, and a fast 312 Mhz Intel PXA270 processor. And, of course, the Zire 72 features Palm's suite of information management applications and the ability to edit Word- and Excel-compatible files and synchronize with Microsoft Outlook (Windows only). It's also available in the original blue version.

Upgrade Features
The Zire 72 offers the following improvements to the Zire 71:

Built-in Camera
The back of the Zire 72 holds the built-in still and video camera, which does not require you to slide the back of the PDA to activate it (like the Zire 71 did). You can shoot video with sound turned on or off at 320 x 240 pixel resolution and 15 frames per second. Just use the handheld screen to frame the video, tap the "record" button on the display, then save your video to an optional expansion card after tapping the "stop" button.

Last updated: June 04, 2020 at 02:01 EST. Pricing information is provided by the listed merchants. GoSale.com is not responsible for the accuracy of pricing information, product information or the images provided. Product prices and availability is subject to change. Any price and availability information displayed on amazon.com or other merchants at the time of purchase will apply to the purchase of the product. As always, be sure to visit the merchant's site to review and verify product information, price, and shipping costs. GoSale.com is not responsible for the content and opinions contained in customer submitted reviews.