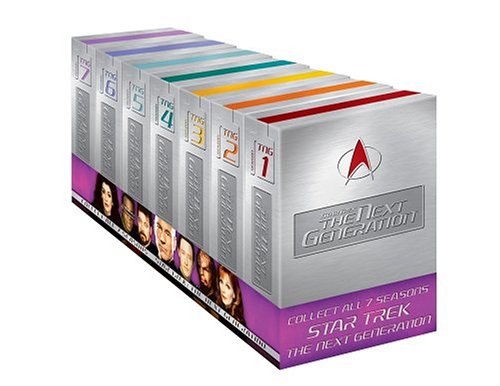 Editorial Review
After Star Wars and the successful big-screen Star Trek adventures, it's perhaps not so surprising that Gene Roddenberry managed to convince purse string-wielding studio heads in the 1980s that a Next Generation would be both possible and profitable. But the political climate had changed considerably since the 1960s, the Cold War had wound down, and we were now living in the Age of Greed. To be successful a second time, Star Trek had to change too.

A writer's guide was composed with which to sell and define where the Trek universe was in the 24th Century. The United Federation of Planets was a more appealing ideology to an America keen to see where the Reagan/Gorbachev faceoff was taking them. Starfleet's meritocratic philosophy had always embraced all races and species. Now Earth's utopian history, featuring the abolishment of poverty, was brandished prominently and proudly. The new Enterprise, NCC 1701-D, was no longer a ship of war but an exploration vessel carrying families. The ethical and ethnical flagship also carried a former enemy (the Klingon Worf, played by Michael Dorn), and its Chief Engineer (Geordi LaForge) was blind and black. From every politically correct viewpoint, Paramount executives thought the future looked just swell!

Roddenberry's feminism now contrasted a pilot episode featuring ship's Counsellor Troi (Marina Sirtis) in a mini-skirt with her ongoing inner strengths and also those of Dr. Crusher (Gates McFadden) and the short-lived Tasha Yar (Denise Crosby). The arrival of Whoopi Goldberg in season 2 as mystic barkeep Guinan is a great example of the good the original Trek did for racial groups--Goldberg has stated that she was inspired to become an actress in large part through seeing Nichelle Nichols' Uhura. Her credibility as an actress helped enormously alongside the strong central performances of Patrick Stewart (Captain Picard), Jonathan Frakes (First Officer Will Riker), and Brent Spiner (Data) in defining another wholly believable environment once again populated with well-defined characters. Star Trek, it turned out, did not depend for its success on any single group of actors.

Like its predecessor in the 1960s, TNG pioneered visual effects on TV, making it an increasingly jaw-dropping show to look at. And thanks also to the enduring success of the original show, phasers, tricorders, communicators and even phase inverters were already familiar to most viewers. But while technology was a useful...
[+] Read More

Set Price Alert
Set Price Alert
Read Reviews
Searching Stores
Found at 0 Store
Last updated: January 28, 2020 at 05:26 EST. Pricing information is provided by the listed merchants. GoSale.com is not responsible for the accuracy of pricing information, product information or the images provided. Product prices and availability is subject to change. Any price and availability information displayed on amazon.com or other merchants at the time of purchase will apply to the purchase of the product. As always, be sure to visit the merchant's site to review and verify product information, price, and shipping costs. GoSale.com is not responsible for the content and opinions contained in customer submitted reviews.